IIUC, there is a self-referential (“auto-catalyzing”) aspect to this method which is very interesting. The Cas9 gene (payload) also encodes the guide RNA (target) information, which determines the location of the DNA cut.

Needless to say, this is a very powerful and potentially dangerous technology.

Enrico Fermi (speaking about atomic weapons): Once basic knowledge is acquired, any attempt at preventing its fruition would be as futile as hoping to stop the earth from revolving around the sun.

Biologists devise invasion plan for mutations (Science): On 28 December 2014, Valentino Gantz and Ethan Bier checked on the fruit flies that had just hatched in their lab at the University of California (UC), San Diego. By the classic rules of Mendelian genetics, only one out of four of the newborn flies should have shown the effects of the mutation their mothers carried, an X-linked recessive trait that causes a loss of pigmentation similar to albinism. Instead, nothing but pale yellow flies kept emerging. “We were stunned,” says Bier, who is Gantz’s Ph.D. adviser. “It was like the sun rose in the west rather than the east.” They hammered out a paper and submitted it to Science 3 days later. [ Bier and Gantz Science paper ]

… George Church, a geneticist at Harvard Medical School in Boston who is a leader in the field, believes the new study should not have been published, because it does not include measures to restrain the spread of unintended mutations. “It is a step too far,” he says. …

… Creating a gene drive system wasn’t Gantz’s original goal, Bier says. “We were just trying to solve a practical problem.” Gantz studies the development of fruit fly wing veins, for which he must create flies with multiple mutations. That’s typically painstaking work, requiring large numbers of flies over many generations to create a single multimutant. Last summer, Gantz made a tweak to the CRISPR system, in which an engineered bacterial protein, Cas9, uses a string of RNA to find and delete, replace, or otherwise edit a target DNA sequence. By equipping the CRISPR gene cassette with DNA sequences flanking the targeted gene, Gantz hoped to create a mutation that would “auto-catalyze.” Once incorporated on one chromosome, it would produce new copies of the CRISPR complex that would target and edit the gene everywhere it appeared. … 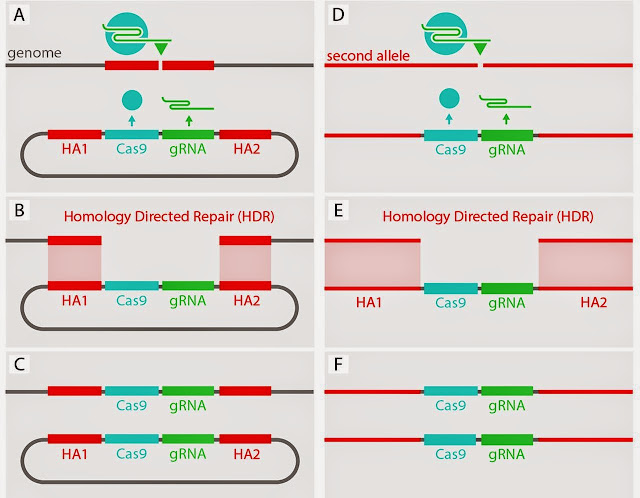 Similar demonstration in yeast by the Church lab:

… Because synthetic gene drives would alter the global environmental commons, the decision to deploy such a drive must be made collectively by society. … Fortunately, a simple and costless precaution is both available and already utilized for different reasons by many laboratories: avoid delivering the Cas9 gene on a DNA cassette that also encodes a guide RNA. …

The following paper from Harvard’s Wyss Institute (which also produced the video below) provides a nice overview of CRISPR gene drives. The paper appeared last summer.

Abstract: Gene drives may be capable of addressing ecological problems by altering entire populations of wild organisms, but their use has remained largely theoretical due to technical constraints. Here we consider the potential for RNA-guided gene drives based on the CRISPR nuclease Cas9 to serve as a general method for spreading altered traits through wild populations over many generations. We detail likely capabilities, discuss limitations, and provide novel precautionary strategies to control the spread of gene drives and reverse genomic changes. The ability to edit populations of sexual species would offer substantial benefits to humanity and the environment. For example, RNA-guided gene drives could potentially prevent the spread of disease, support agriculture by reversing pesticide and herbicide resistance in insects and weeds, and control damaging invasive species. However, the possibility of unwanted ecological effects and near-certainty of spread across political borders demand careful assessment of each potential application. We call for thoughtful, inclusive, and well-informed public discussions to explore the responsible use of this currently theoretical technology.

… We submit that Cas9 is highly likely to enable scientists to construct efficient RNA-guided gene drives not only in mosquitoes, but in many other species. In addition to altering populations of insects to prevent them from spreading disease (Curtis, 1968), this advance would represent an entirely new approach to ecological engineering with many potential applications relevant to human health, agriculture, biodiversity, and ecological science. …