For the past couple of weeks Lisa Bright and I have been scouring the MSU Archives trying to a) decide on a location for the 2015 Summer Field School, and b) shed light on the mystery assemblage found behind Hannah Admin Building. See Makers Marks from the Admin Assemblage, Sorting the Admin Artifact Assemblage, and Ceramic Decorations from the Admin Assemblage for more info. As these blog posts mention the Admin Assemblage is interesting because it has several different types of high quality ceramics, a ton of glass (window, bottle etc..) and an assortment of lab equipment (beakers, test tubes, and thermometers). Much of the glass has been burned, initially leading us to conclude the assemblage was a result of the burning of the Engineering Building in 1915. However, the random assortment of ceramics which date to as early as the 1870s made us question that original assumption. Lisa and I approached the archival research with the goal of figuring out where/what this assemblage is from, and if there is a larger site/deposit that could be excavated for the field school. 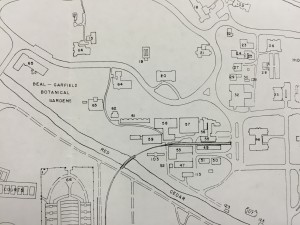 Using our detective-like skill set, we began by looking at historic campus maps and aerial photos. Using these documents we were able to track which buildings were in the general area, when they were built, and when they were destroyed. The most obvious, and closest buildings in the area were buildings related to Mechanical Engineering, i.e. the Machines Shops and the Foundry. Josh has been researching these buildings, so we expanded our area and pinpointed two buildings of interest, the second Wells Hall (not to be confused with the first that burned in 1905, or the third, that was built in 1968) and Professor Gunson’s residence (which changes names several times).

The second Wells Hall was built in 1907 and housed 200 students. It was located northwest of the Hannah Admin Building (not built until 1950), where the library now stands. Wells Hall was razed in 1966 to make room for the the east wing addition of the library. Because of its proximity to the Admin Building, the early construction of Wells Hall, and its resulting demolition around the time of the construction of Hannah, this building is a good candidate for the Admin Assemblage. To confirm this relation, we are now digging into the construction and demolition records for Wells Hall to see if there is any mention of dumping debris by the river. 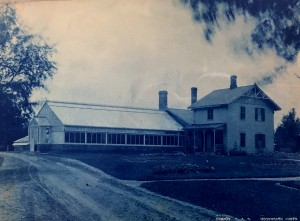 The Gunson Residence was also a potential option for the assemblage. The house was built in 1892 and was the residence of Prof. Thomas Gunson until his death in 1940. After Prof. Gunson’s death, the house changed names several times in the following decades until it was demolished to make way for the construction of the library.

After reading about the Gunson House, Lisa and I decided to dig deeper to see if this random house on campus could be the answer to our mystery assemblage. Tune in next week for Lisa’s findings on the Gunson House after 1940. To be continued….

Kate Frederick is a graduate student studying anthropology at Michigan State University with a focus on Great Lakes Archaeology. She has a particular interest in hunter-gatherer food storage and its role in risk management, decision making, and nutrition. Additionally, her current experimental archaeology project is testing the efficiency of subterranean food storage pits by accurately recreating storage and processing techniques used by hunter-gatherers. Currently, She is the Campus Archaeologist for the MSU Campus Archaeology Program (http://campusarch.msu.edu/). This position allows her to work with multiple departments across the University to mitigate and protect the archaeological resources on MSU’s campus.