” Our debates, for the most part, are examples unworthy of a playground: name-calling, verbal slaps, gossip, giggles, all while the swings and slides of governance remain empty.”

So notes beloved author, Toni Morrison in a recent piece for the 150th anniversary issue of The Nation.
This 260+ page collection of current and selected pieces from the past is available free at The Nation website. I can’t recommend it enough. Of course the love of my life and I have been subscribers for about 35 of those 150m years years. Enjoying the writing, if not always agreeing with the authors, but challenged by their thoughtfulness and passion for justice, peace, equality. Morrison goes on in this short piece sharing her insight, compassion and gift of language as she struggles openly with repairing our society.

“In this contemporary world of violent protests, internecine war, cries for food and peace, in which whole desert cities are thrown up to shelter the dispossessed, abandoned, terrified populations running for their lives and the breath of their children, what are we (the so-called civilized) to do?

The solutions gravitate toward military intervention and/or internment—killing or jailing. Any gesture other than those two in this debased political climate is understood to be a sign of weakness. One wonders why the label “weak” has become the ultimate and unforgivable sin. Is it because we have become a nation so frightened of others, itself and its citizens that it does not recognize true weakness: the cowardice in the insistence on guns everywhere, war anywhere? How adult, how manly is it to shoot abortion doctors, schoolchildren, pedestrians, fleeing black teenagers? How strong, how powerful is the feeling of having a murderous weapon in the pocket, on the hip, in the glove compartment of your car? How leaderly is it to threaten war in foreign affairs simply out of habit, manufactured fear or national ego? And how pitiful? Pitiful because we must know, at some level of consciousness, that the source of and reason for our instilled aggression is not only fear. It is also money: the profit motive of the weapons industry, the financial support of the military-industrial complex that President Eisenhower warned us about.”
Toni Morrison, “No Place for Self-Pity”The Nation, 150th Anniversary issue

In between reading many of the articles in this issue I’ve been moving through a 2009 little noted publication, Peace Business: Humans and Nature Above Markets and Capital (Johan Galtung, Jack Santa Barbara, and Frederick Dubee). 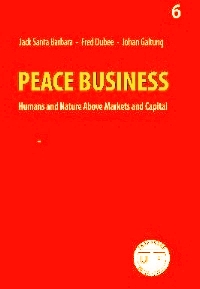 This fresh orientation aligns well with similar growing interest in what is more frequently referred to as “social enterprise” or “social entrepreneurship”, or even more recently as B-Corps (social benefit corporations).

It is this emphasis on real “possibilities” that enthralls me in both of the items noted above as well as other essays in The Nation anniversary issue. Several more examples from this issue follow. Rebecca Solnit, whom I cite frequently in this blog writes in a piece, The Most Important Thing We Can Do To Fight Climate Change Is Try

…There are monumental changes under way that seem as if they will only continue: the decline of homophobia, the widening of rights and privileges from white Christian men to the rest of us, nonwhite and nonmale. But there are backlashes against these things as well, and the other way to call it unpredictable is to say that we can’t foresee which tendency will hold sway a century or more hence. Mostly, what we can learn by looking backward is that who and what we are now—sexually, socially, technologically, ecologically—was not only unpredictable but unimaginable a century or even a half-century ago. So is who and what we will be in another 100 years.

History is rarely linear. The cast of characters is never announced in advance, and the storylines are full of left turns, plot twists, about-faces, surprising crossroads and unintended consequences…

…People imagine that the world doesn’t change (having forgotten how dramatically it has changed even in the last few decades), or that all its changes will be linear. Or they imagine that the only source of change is the most powerful institutions and individuals, forgetting how much change has been wrought of late by marginalized groups (queer rights), oppressed populations (the Arab Spring), relatively small activist movements (the climate movement) or surprise players (the hotel maid who brought down the head of the International Monetary Fund in 2011, for example). You have to believe in change; maybe you have to hope. Or at least be willing to gamble.
You have to be willing to gamble on a world not dominated by fossil fuels and the power that fossil-fuel fortunes give to a handful of people and corporations. You have to be willing to imagine a world in which we recognize that what we’re called upon to do is not necessarily to sacrifice; instead, it’s often to abandon what impoverishes and trivializes our lives: the frenzy to produce and consume in a landscape of insecurity about our individual and collective futures. It also means appreciating the value of many other things—confidence in the future, a greatly reduced fear of contamination or poisoning, economic justice, local engagement, decentralization, democracy—in which we’ve been poor during the Age of Fossil Fuel. These are the things we stand to gain if we conquer the fossil-fuel industry and reinvent energy in our time.

The other pieces I have read in this section of the issue under the heading of  Radical Futures are just a glimpse of possibilities already imagined and yet to be built. They cover a wide gamut of arenas of modern life.

These are a few of  more than a dozen such compelling possibilities from this stable of writers, thinkers, doers. As Solnit concludes in her moving essay the future is unknowable with any certainty. Therein should lie some hope.

…Our world is both better (more inclusive, less discriminatory) and worse (think corporate consolidation, ecological devastation, the surveillance state) than the world of fifty years ago. The ways in which it is better happened because people made demands and then acted to realize them. It was not inevitable that Native Americans, women, gays, lesbians, and transgender people would gain rights and respect. The better part of our present happened because of enormous efforts, sometimes over decades or, as with the vote for women, nearly a century of effort and social transformation.
We don’t have a map for any of this, which is what all the confident prophecies of a predictable, linear future pretend to offer us. Instead, we have, along with the capacity for effort, a compass called hope: a past that we can see, that we can remember, that can guide us along the unpredictable route, along with our commitment to beings now living and yet to be born, that commitment called love.