One of the bigger question surrounding the Hannah Admin building assemblage is, “Where in this area could these high quality ceramics have come from?”. They’re nicer than what would have been found in typical student areas, the site is south of faculty row, and they date to a wide time span.

As Kate mentioned in her last blog, during our research we noticed a building in the general area of the current Hannah Admin building that had potential as the ceramics contributor. On maps prior to 1941, campus building no. 63 is labeled as Greenhouse/ Gunson Residence. 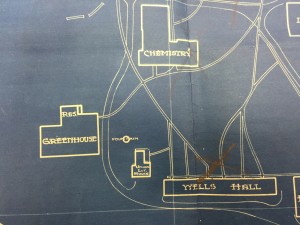 However, following Dr. Gunson’s death in 1940, the building changes names to the Anna E. Bayha Home Management House (sometimes also being labeled just Bayha house, or home economics house). According to the August 28, 1941 Board of Trustees Notes it was Dean Dye, of the College of Human Ecology, that proposed to convert the Gunson residence into another home management practice house.

The home management practice houses were designed to give women enrolled in home management courses practical experience with their new skills. The management house system was started in 1916, and as of 1943 there were four of these houses on campus. The original three were in faculty row (#6 Ellen Henrietta Richards home, #5 Maude Gilchrist home, #4 Ethel Gladys Webb home), and the Bayha house was the newest addition. 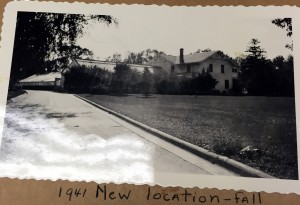 Scrapbook photo of the Bayha House – Courtesy of MSU Archives

Each home had an advisor, and seven to eight students who were responsible for taking care of the household. During their eight week stay in the house, the girls were tasked with living on three different levels of food costs; 30 cents per person per day, 50 cents, and lastly 75 cents. The program was designed to give students experience in nutrition, meal planning, cooking, and the daily maintenance of a house. (Source: News Paper Article “Here’s Food Budget of 30 Cents a Day” by Bernice Carlson, State Journal Women’s Writer” no date)

Although maps and financial statements provided important information, Kate and I set off to try to find images of the inside of the home, with the hope that perhaps there were some pictures of the ceramics/dishes used by the women.

Thankfully, we were in luck! The archives have a collection of Home Management House scrapbooks, ranging from 1928 to 1971. 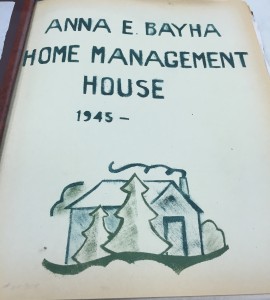 We were even further rewarded when we located the scrapbooks specifically associated with the Bayha Home. Although we have not been able to match specific pieces from the assemblage to the photos, they do show a wide variety of dish wear in use within the home. 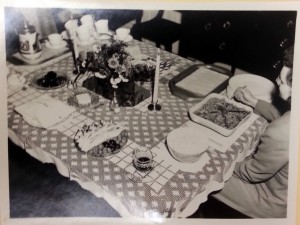 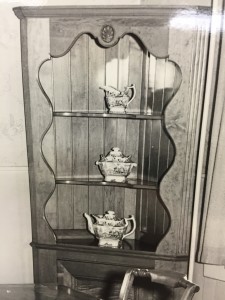 Later maps and a President’s report from August 7, 1947 mention that the Bayha house was modified to be used as a nursery school.   This change occurred because of the construction of Polacci Hall.  This building combined all four of the home management houses into units within a single building.  The house remained a nursery until it was razed in late 1953-early 1954 to make room for the new library.