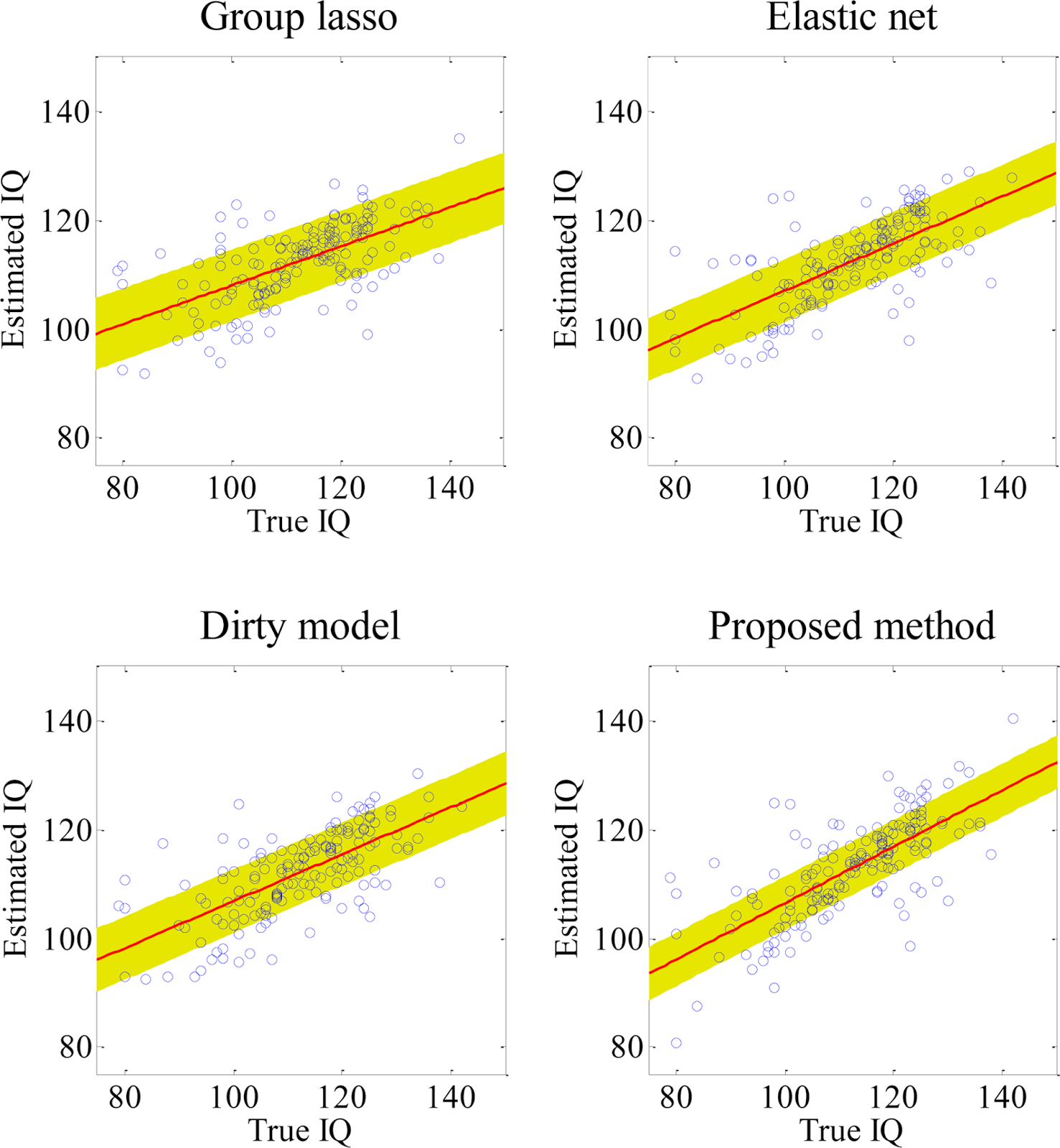 These authors use machine learning techniques to build sparse predictors based on grey/white matter volumes of specific regions. Correlations obtained are ~ 0.7 (see figure).

I predict that genomic estimators of this kind will be available once ~ 1 million genomes and cognitive scores are available for analysis. See also Myths, Sisyphus and g.

In this paper, we propose a novel framework for IQ estimation using Magnetic Resonance Imaging (MRI) data. In particular, we devise a new feature selection method based on an extended dirty model for jointly considering both element-wise sparsity and group-wise sparsity. Meanwhile, due to the absence of large dataset with consistent scanning protocols for the IQ estimation, we integrate multiple datasets scanned from different sites with different scanning parameters and protocols. In this way, there is large variability in these different datasets. To address this issue, we design a two-step procedure for 1) first identifying the possible scanning site for each testing subject and 2) then estimating the testing subject’s IQ by using a specific estimator designed for that scanning site. We perform two experiments to test the performance of our method by using the MRI data collected from 164 typically developing children between 6 and 15 years old. In the first experiment, we use a multi-kernel Support Vector Regression (SVR) for estimating IQ values, and obtain an average correlation coefficient of 0.718 and also an average root mean square error of 8.695 between the true IQs and the estimated ones. In the second experiment, we use a single-kernel SVR for IQ estimation, and achieve an average correlation coefficient of 0.684 and an average root mean square error of 9.166. All these results show the effectiveness of using imaging data for IQ prediction, which is rarely done in the field according to our knowledge.

Training and testing of models was performed as described below. They had only 164 individuals in their sample, so IIUC the average correlation is computed on test samples of ~16 individuals. It would be good to see their predictors tested on larger data sets. I wonder how stable the predictor variables (feature coefficients) were across partitions.

We performed experiments with 10-fold cross-validations. Specifically, we randomly partitioned each dataset into 10 subsets with no replacement, and used 9 out of the 10 subsets for training and the remaining one for testing. To further avoid a possible bias during partitioning, we repeated the experiments 10 times.

Some background from the paper. Strangely, they don’t cite the Thompson lab (UCLA) results on brain size and intelligence (21k individuals). IIRC from their results, brain size alone correlates 0.4 with IQ.

… Uncovering human intelligence has always been of major interest in cognitive neuroscience. With the advent of brain imaging, there have been efforts to investigate the relation between brain anatomy and intelligence [3,4], and substantial understanding has been achieved in the field. For example, Supekar et al. showed that the size and circuitry of certain parts of children’s brains could be a potential predictor for how well they would respond to intensive math tutoring [5]. Chen et al. [6] demonstrated that the volumetric analysis of gray matter (GM) from structural Magnetic Resonance Imaging (MRI) could be used to predict a subsequent decline in IQ in children with sickle cell disease. McDaniel et al. [3] found that the volume of the brain is positively correlated with IQ according to MRI-based experiments. Frangou et al. [7] reported positive correlations between IQ score and GM density of the orbitofrontal cortex, cingulate gyrus, cerebellum, and thalamus, but negative correlation between IQ score and the caudate nucleus. On the other hand, Navas-Sanchez et al. [8] investigated the relationship between IQ score and microstructure of white matter (WM) tracts using diffusion tensor imaging (DTI), and found that IQ score is positively correlated with fractional anisotropy (FA). Kim et al. [9] found that lower performance in verbal IQ score is correlated with the decrease of FA values. In another DTI-based study, Welcome et al. [10] discovered that the volume of WM fiber tracts is correlated with nonverbal IQ score. Inspired by these strong correlations between brain anatomy and IQ score, we propose, in this study, a novel framework to estimate IQ by using GM and WM features extracted from structural MRI. …

Their results might give some indication as to which regions of the brain are responsible for most of the population variation in IQ. Below are the brain regions most commonly identified as “features” by sparse learning methods. 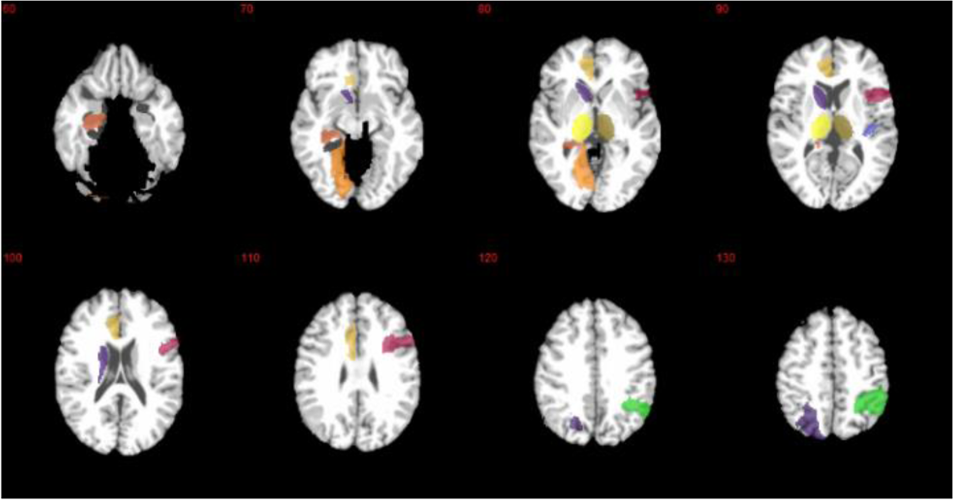 From the comments (55% of variance means a correlation just larger than 0.7):

There are lots of recent studies that have tried to estimate IQ from MRI or EEG readings (sometimes called “neurometric” IQ); many of the teams are based in South Korea and Malaysia. The Malaysian group, based at the MARA University of Technology, has published about a dozen papers over the past two years, involving hundreds of subjects. They can now use EEG readings to sort subjects into one of seven IQ ranges (e.g. 90-100, 120-130) with 83% accuracy; this figure jumps to 98% when subjects are sorted into one of three IQ ranges (low, medium, or high). The South Korean researchers, at Seoul National University, have been combining MRI and fMRI scans to predict IQ scores, and in late 2012 they were granted a patent for their “neurobiological method for measuring human intelligence,” which can explain up to 55% of the variance between individual IQ scores. An example (from Dec 2013) is at http://ieeexplore.ieee.org/…