I recently began conducting archival research into the second Wells Hall. We have been interested in learning details regarding the building’s construction and subsequent demolition, as well as piecing together what student life was like in the dormitory. During this summer’s CAP field school, we may conduct excavations near the location of the former Wells Hall, so it is important that we understand how the landscape was used in the past. When we begin to recover artifacts, this will make it easier for us to place them in time. 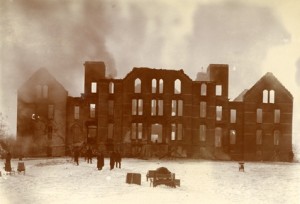 The first Wells Hall burned in 1905

There have been three buildings on MSU’s campus called Wells Hall, named for early board president, Hezekiah G. Wells. While the most recent, built in 1968, holds courses and houses several university departments such as Mathematics and Classical Cultures, the first two buildings were men’s dormitories located just west to Olds Hall in a space now occupied by part of the Main Library. The first Wells Hall housed about 130 from 1877 to 1905, when it was destroyed in a fire. The second Wells Hall, the focus of this research, broke ground in 1905. The new building was significantly larger than its predecessor, and was divided into six “wards” labeled A-F. This was done both to reduce the noise level inside the building as well as minimizing fire hazards. The latter proved fruitful as the building survived the fire that destroyed the original Engineering Building next door, sustaining only minor damage. 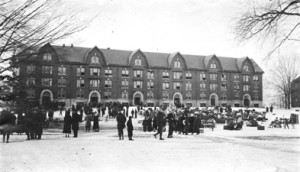 Professor Emeritus John Henry wrote a detailed history of the building. Wards A-C generally housed louder students, while the more “civilized” crowd lived in wards E and F. Student athletes inhabited the top floor, while the basement was home to Club A, a dining hall that served what Dr. Henry described as a “high calorie, no frills” diet that earned the ire of campus doctor, Richard Olin. The dorm held no showers, with students having to walk to the campus gymnasium to bathe. Additionally, the only amenities provided by the school were a cot, desk, and bureau. Students were responsible for providing their own lamps and linens. Further, during the early 20th Century, women were forbidden from the building save Graduation Day, when families and significant others were invited to tour the building. 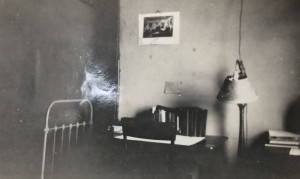 As I continue pouring through the archives in the remaining week of school, I will be focusing on the demolition of the Wells Hall. If our excavations this summer reveal part of the building that has not been covered by the library, understanding who lived there and what types of activities occurred will help us paint a fuller picture of how the MSU campus has evolved over time.