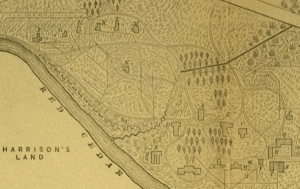 1880’s Map of MSU, via MSU Archives and Historical Records

Michigan State University’s campus began as a small grouping of buildings in an oak opening, and since the 1870s, when the College President decreed that no further construction was allowed within this central wooded area, it has been known as the “sacred space”. The Campus Archaeology Program has worked diligently since 2005 to investigate and protect the archaeological integrity of this historic portion of campus, and much of our work has been located within this ‘sacred space’. It is perceived as one of the last historic and authentic feature of MSU’s campus, which has led to the it being discussed as a static, preserved landscape- a perception that we too as the archaeologists on campus have perpetuated to some extent. However, despite being ‘sacred’, construction, destruction and reconstruction of the space has continued at a steady pace throughout the over 150 years of campus life.

For the “Cultural Landscapes and Heritage Values” conference held at the University of Massachusetts, Amherst, I’m going to be discussing this paradox: why do we talk about this central area of campus like it is a preserved and protected landscape, when construction crews, landscaping and even ourselves have altered it and actively dig it up?

Our excavations have revealed a number of interesting facts about the ‘sacred space’ and its preservation. 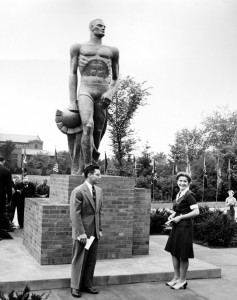 1945 Photo of Sparty, via MSU Archives

Even though the landscape isn’t sacred in the sense that it is static, it is sacred in the fact that the vital characteristics and identity of the space remains coherent and supportive of our university and community identity. But it isn’t just that- the space is a reminder of a lost landscape. We don’t have the first campus buildings, we don’t have the small college in the oak opening. What we have is a space that harkens back to those early designs and hopes of the people who wanted to create a university dedicated to agricultural research. We have natural space in the middle of a thriving, busy and massive campus. The sacred space is a refuge for students, faculty and community members- it is a space of tranquility, a space to restore one’s emotional and physical health by taking a break from the pace of life. It has always been a part of our Spartan identity, and it always will be. Yes, the space has changed- but so have we, so has our university, so has the community.

For us, the space is hallowed ground, a cemetery for the buildings of the original agricultural college of the state of Michigan, and the natural landscape is the piece that remains. As archaeologists, it is our duty to continue to promote this sacredness, not as a static piece of history, but as sacred because it is a vital piece of our Spartan identity, sacred as the site of the original campus, sacred as a shelter from the modern world.