Ironically, the only “permanent” US AFRICOM base on the continent – Camp Lemonnier in Djibouti – host to many Army, Navy, Marine, Air Force, and CIA operations is being joined by new bases from Japan and China.   Djibouti, smaller in area than the City of Chicago, already hosts bases of 1,500 French  troops and several hundred Japanese troops. European Union naval units have a permanent military presence in Djibouti  as well.

Japan chooses Djibouti for First Foreign Base since WW II

Keizo Kitagawa, captain of Japan’s navy force and coordinator of the Djibouti deployment, told the French news agency,” Japan has chosen Djibouti for its suitable air and seaports as well as political stability.” The new base will include an airfield for Japan’s Lockheed Martin P-3 Orion maritime patrol aircraft and a permanent port facility. Kitagawa added, “This will be the only Japanese base outside our country and the first in Africa … We are deploying here to fight piracy and for our self-defence. Japan is a maritime nation and the increase in piracy in the Gulf of Aden, through which 20,000 vessels sail every year, is worrying.”

The Guardian (January 23, 2009) reported that Camp Lemonnier, a former French Foreign Legion base in Djibouti, also served as one of the CIA Black Sites for interrogation of detainees from 21 Middle Eastern countries during the Bush Administration’s Global War on Terror.  AlJazeera America (May 2, 2015) reports on the Senate Intelligence Committee findings on Djibouti as a CIA Black Site, even though the Djibouti Government has denied hosting secret prison facilities for the U.S.  Over the last decade Lemonnier grew from a temporary U.S. outpost to a sprawling base hosting 4,000 troops, including special operations units with a $1.4 billion expansion plan now being executed.

During the May 2014 visit to Washington of Djibouti’s President Ismail Guelleh, the U.S. signed a new 10-year lease for the base.  “The lease contract is set for 10 years with an option for extension for 10 more years on the same terms, which were not officially disclosed. But according to officials from both sides Washington had to commit to more than double the rent it pays annually to Djibouti from roughly $30 million to $63 million. The US also will give $70 million economic aid annually to Djibouti for maintaining the base. After 20 years the price would be re-negotiated.

The deal also appears to end speculation that Djibouti might lease a small parcel of land to Russia and grant it military landing rights at a time when relations between Washington and Moscow have badly deteriorated over the crisis in Ukraine. Russia has been an active contributor to the international antipiracy effort in the region since it first deployed warships in 2008.

Now, China is negotiating to establish a base the and operate there as well. “China already is financing several major infrastructure projects estimated to total more than $9bn, including improved ports, airports and railway lines to landlocked Ethiopia, for which Djibouti is a lifeline port.”

In addition, Craig Whitlock of the Washington Post reports that Djibouti’s crowded  base for scheduled commercial as well as military and CIA drones and counter-terrorism air operations, has become a site of serious tensions  between the U.S. military and intelligence operatives and local Djiboutian air controllers.

The skies above the U.S. military’s counterterrorism hub on the Horn of Africa have become chronically dangerous, with pilots forced to rely on local air-traffic controllers who fall asleep on the job, commit errors at astronomical rates and are hostile to Americans, documents show. 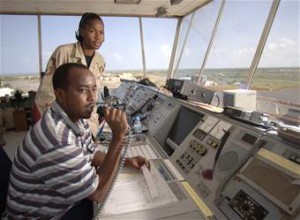 Conditions at Camp Lemonnier in Djibouti, the base for U.S. pilots flying sensitive missions over Yemen and Somalia, have become so dire that American warplanes and civilian airliners alike are routinely placed in jeopardy, according to federal aviation experts and documents obtained by The Washington Post under the Freedom of Information Act.

Unlike other major U.S. military bases around the world, Camp Lemonnier is wholly dependent on civilian air-traffic controllers, hired by the government of Djibouti to keep the skies safe. But as the base has increased in size and importance, the Djiboutian controllers’ hazardous habits and deep dislike for drones have disrupted U.S. military operations and triggered repeated warnings about the risk of an aviation catastrophe.

the Djibouti government banned U.S. drones from using the main runways of the Djibouti-Ambouli International Airport after five crashes since January 2011 ,of the Predator drones returning to land there, one down near a local residential community. “The Pentagon has temporarily moved the unmanned aircraft from the U.S. base in Djibouti’s capital to a makeshift airstrip (Chabelley Airfield) in a more remote part of the country. U.S. military officials said the disruption has not affected their overall ability to launch drone strikes in the region, but they declined to say whether it has forced them to curtail the frequency of drone missions or hindered their surveillance of al-Shabab camps and fighters.”

Craig Whitlock (Washington Post September 2013) reported that the Chabelley Airfield, deeper in the desert away from Djibouti, with a new $228 million compound, will house up to 700 personnel for the highly secretive Joint Special Operations Command which is increasingly active in Africa.