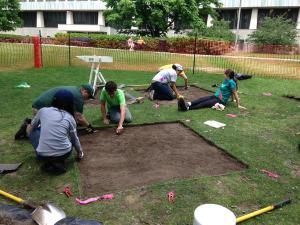 Field Work at MSU this summer

During the month of June, I will be the teaching assistant for the Michigan State University Campus Archaeology Field School. This is a unique field school because it gives students the opportunity to excavate their own campus and add to the university’s history. Sadly, we won’t be finding any human remains (well, hopefully we won’t), so I won’t be updating you on the dig’s progress. However, if you are interested, you can follow along on Twitter at #capfs15 and read our blog here. If you are in the East Lansing area, you are also more than welcome to stop by and visit the dig!

Field work is an important part of being an archaeologist, regardless of if you study human remains or any other type of artifacts. Excavation is a detailed and careful process, and knowing how it is completed at a site can have implications for the research and interpretations. When anyone asks me about how to be a bioarchaeologist or mortuary archaeologist, I always stress the importance of taking a related field school as soon as they can. Here, I want to talk a little bit about why field work is so important! Also, if you have a field school related to mortuary archaeology, feel free to post it in the comments to share with readers!

First there is the interpretation of the burial itself- it is important to excavate carefully to make sure all evidence is collected. Archaeothanatology, or anthropologie de terrain, is a method in mortuary archaeology, which is based on using taphonomy to infer unknowns about burial context. As espoused by Duday (2009), the method requires detailed recording during excavation including the identification of skeletal elements in situ, anatomical orientation, and spatial relationship to other elements. Archaeothanatology aims to identify and account for taphonomic processes, which alter the original characteristics of the funerary deposit in order to determine the original burial context. A new study by Littleton et al. (2012) uses this method in order to better understand the role of khirigsuurs, a distinctive type of Mongolian burial mound.

The role of khirigsuurs has been heavily debated. They are distinctive dry stone monuments found on the
Mongolian steppe, and are associated with the practices of the late Bronze Age peoples (3500-2700 years ago). They are made primarily of local stone, and are highly variable in size and construction. There is usually a large central chamber, covering mound and a surrounding fence. It is unknown whether these were built purely as monuments or as symbolic burial places. Littleton et al. (2012) argues that the khirigsuurs’ primary function was funerary, and through a systematic analysis of the skeletal preservation this hypothesis can be supported. They excavated 35 khirigsuurs using the archaeothanatology method. Following this, they were careful to note any signs of disturbance in the mound: human, animal or natural. All human remains found were exposed and carefully recorded in situ to note burial integrity, body orientation, and burial dimensions. The goal was to determine the relationship between external conditions and the preservation/articulation of the skeletal remains. The external conditions examined included intrinsic conditions (nature and location of the grave including slope and location in ground, biological traits of the individual interred) and extrinsic conditions (human or animal activity after burial, burning, burrowing, root disturbance). The preservation and articulation were numerically scored so they could be compared against the conditions.

Based on the results of the analysis between conditions of burial and preservation, they argue that the primary function of the khirigsuurs was as burial mounds. The reason that this conclusion had been previously disputed was a lack of human remains in the mounds. However, they found that preservation within the mounds is highly variable and correlates with certain conditions. Human remains were more likely to be recovered in khirigsuurs that were located on flat ground and had intact capstones. Conversely, when capstones were disturbed and the mounds were constructed on slopes it was less likely that the remains were intact. In addition to this, they found that the skeletal elements found in the mounds were those that were most likely to survive poor preservation conditions- adult long and flat bones with high amount of cortical hard tissue, rather than subadult cancellous dominated bones.

By examining the taphonomy of the grave they are able to determine the reason that there is variation in bone preservation of the khirigsuurs as well as determine their primary function. Studies like this are important because they aim to determine the original context of the burial. It is quite easy to look at the archaeological site and interpret it as the final burial location, but this direct observation ignores the fact that over time the original context of the burial has changed. As a body decomposes it will shift its position in the ground. Over time the mounds will change, allowing for animals to disturb the remains or weather conditions to erode and shift soil. The goal of this work is use the site as we find it to determine what the original conditions of the burial were, then interpret from there.

Duday, H, (2009) The Archaeology of the Dead: Lectures in Archaeothanatology. Oxbow Books, Oxford.