Grover Krantz and Clyde in life and in death. From the Smithsonian Magazine Article.On the inside of my left wrist, I have a tattoo of an Irish sixpence. The sixpence features an Irish Wolfhound. When I was younger, my family owned a large Irish Wolfhound named Buddy. Getting that dog was a turning point in my young life- he was my best friend, my constant companion, there for me whenever I needed him. But big dogs don’t live long lives, and after nine amazing years, he died. Even though its been a decade since we lost him, I still think about that dog, and it seemed natural when I was looking for a tattoo that I selected something that could signify my research abroad, but also represent him. Grover Krantz loved his Irish Wolfhound so much that when he agreed to donate his skeleton to the Smithsonian, he did so with the requirement that the skeleton of his Irish Wolfhound, Clyde, also be included in the display! Pets are important- often they become part of our family. We mourn their loss, erect monuments to them, and give them proper burials.

Also, for an excellent story of loss and burial of a pet in the modern world, check out Caitlin Dougthy’s post of the Order of the Good Death: Life and Death of a Most Belov’d Meow.

Grover Krantz and Clyde, in life and death. Via Smithsonian Mag.

The first official pet cemetery, Hartsdale Cemetery, was established in 1896 in New York. It was founded by veterinarian, Dr. Samuel Johnson, as a way to help grieving owners provide a proper burial for their lost pets. Almost a century after opening, Hartsdale Pet Cemetery currently has over 80,000 dogs, cats, rabbits, birds, reptiles, monkeys, horses, a lion, and even some humans buried on its land. Looking at the grave stones and layout, one wouldn’t know the difference between this and other cemeteries- the headstones and markers are elaborate and varying in sizes, there are full sized statues and memorials, and there are even mausoleums. 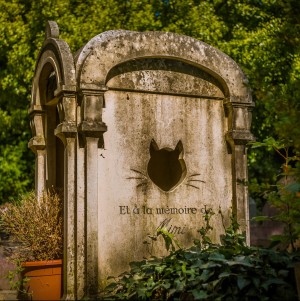 This trend of burying pets like one would bury a family member is actually a fairly new trend beginning at the end of the 19th century. During the Victorian era, the fidelity of dogs was caught up in the broader fascination with sentiment and death. Dogs were seen as exemplifying faith beyond death. A great example of this is Greyfriar’s Bobby- a small Skye Terrier who stood watch by the grave of his owner during the end of the 19th century in Greyfriar’s Kirkyard. His persistent to maintain his faith to his master was lauded by Victorian society, and after the dog’s death in 1872, a statue was erected to him at the cemetery’s entrance. As argued by Howell (2002), it was during this era where the dog’s status shifted from companion to family member. The elaborate memorials created by Queen Victoria for her pets was copied by all ranks of life, and is a phenomenon that continues today.

Of course, there are burials of animals that we consider pets long before the Victorian era. A new article by Nicholson, Ikram and Mills (2015) investigates the burials from the Catacombs of Anubis, also known as the Dog Catacombs. It is well-known that animals feature prominently into Ancient Egyptian religion, and that cats were often mummified as companions to protect their masters in the afterlife. Animal cults were popular in Egypt from 747 to 30 BCE. Dogs were given as gifts to Anubis and cats were given as gifts to Bastet. The animals were mummified in the proper methods, and then placed in the respective tomb of the animal deity. 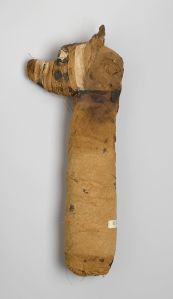 The Catacomb of Anubis consists of a 5,000 square foot network of underground tunnels lined with linen-wrapped canines. The bones of these dogs indicate that they were primarily young individuals, newborns raised specifically for this purpose. Most of the dogs (or foxes or jackals) were wrapped simply in linen and preserved with resin. Egyptians likely took pilgrimages to these catacombs to seek favor with Anubis, and would bring a mummified dog as a gift. The mummy would be left in the central gallery of the catacomb. Once this gallery filled up, priests and caretakers of the catacomb would move the older specimens into other tunnels and parts of the catacomb. A total of 6034 individuals were recovered from this catacomb- 92% were dogs.

This Egyptian form of animal burial of course is quite different from the burials that we or the Victorians gave their pets. Of course, there are other potential burials that may indicate that our conception of dogs as companions and family members is an ancient one. In Siberia at the site of Cis-Baikal, a burial of a dog dating to 5,000 BCE shows signs that it may have been buried in a similar manner to humans. Losey et al. (2011) argue that some of the dogs from the prehistoric site of Cis-Baikal may have been seen in life as being distinct souls on par with humans, and therefore at death would have required mortuary rites similar to those of their human counterpart.

Sadly, we cannot fully know the meaning behind ancient animal burials. Whether the creature was seen as merely a source of food and labor, or a companion, or a family member can only be known by those who buried them. We have to be careful not to project our own love of our pets onto the past, since even in modern societies today- our pets may be seen as food rather than family.