Regular readers will know that I’ve been interested in the so-called Teller-Ulam mechanism used in thermonuclear bombs. Recently I read Kenneth Ford‘s memoir Building the H Bomb: A Personal History. Ford was a student of John Wheeler, who brought him to Los Alamos to work on the H-bomb project. This led me to look again at Richard Rhodes’s Dark Sun: The Making of Hydrogen Bomb. There is quite a lot of interesting material in these two books on the specific contributions of Ulam and Teller, and whether the Soviets came up with the idea themselves, or had help from spycraft. See also Sakharov’s Third Idea and F > L > P > S.

The power of a megaton device is described below by a witness to the Soviet test.

The Soviet Union tested a two-stage, lithium-deuteride-fueled thermonuclear device on November 22, 1955, dropping it from a Tu-16 bomber to minimize fallout. It yielded 1.6 megatons, a yield deliberately reduced for the Semipalatinsk test from its design yield of 3 MT. According to Yuri Romanov, Andrei Sakharov and Yakov Zeldovich worked out the Teller-Ulam configuration in conversations together in early spring 1954, independently of the US development. “I recall how Andrei Dmitrievich gathered the young associates in his tiny office,” Romanov writes, “… and began talking about the amazing ability of materials with a high atomic number to be an excellent reflector of high-intensity, short-pulse radiation.” …

Victor Adamsky remembers the shock wave from the new thermonuclear racing across the steppe toward the observers. “It was a front of moving air that you could see that differed in quality from the air before and after. It came, it was really terrible; the grass was covered with frost and the moving front thawed it, you felt it melting as it approached you.” Igor Kurchatov walked in to ground zero with Yuli Khariton after the test and was horrified to see the earth cratered even though the bomb had detonated above ten thousand feet. “That was such a terrible, monstrous sight,” he told Anatoli Alexandrov when he returned to Moscow. “That weapon must not be allowed ever to be used.”

The Teller-Ulam design uses radiation pressure (reflected photons) from a spherical fission bomb to compress the thermonuclear fuel. The design is (to quote Oppenheimer) “technically sweet” — a glance at the diagram below should convince anyone who understands geometrical optics! 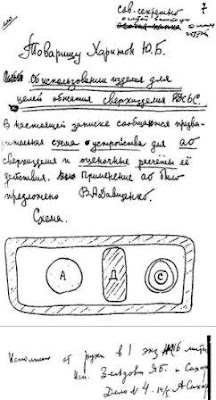 In discussions of human genetic engineering (clearly a potentially dangerous future technology), the analogy with nuclear weapons sometimes arises: what role do moral issues play in the development of new technologies with the potential to affect the future of humanity? In my opinion, genetic engineering of humans carries nothing like the existential risk of arsenals of Teller-Ulam devices. Genomic consequences will play out over long (generational) timescales, leaving room for us to assess outcomes and adapt accordingly. (In comparison, genetic modification of viruses, which could lead to pandemics, seems much more dangerous.)

It is my judgment in these things that when you see something that is technically sweet, you go ahead and do it and you argue about what to do about it only after you have had your technical success. — Oppenheimer on the Teller-Ulam design for the H-bomb.

More excerpts from Dark Sun below.

Enthusiasts of trans-generational epigenetics would do well to remember the danger of cognitive bias and the lesson of Lysenko. Marxian notions of heredity are dangerous because, although scientifically incorrect, they appeal to our egalitarian desires.

A commission arrived in Sarov one day to make sure everyone agreed with Soviet agronomist Trofim Lysenko’s Marxian notions of heredity, which Stalin had endorsed. Sakharov expressed his belief in Mendelian genetics instead. The commission let the heresy pass, he writes, because of his “position and reputation at the Installation,” but the outspoken experimentalist Lev Altshuler, who similarly repudiated Lysenko, did not fare so well …

The transmission of crucial memes from Szilard to Sakharov, across the Iron Curtain.

Andrei Sakharov stopped by Victor Adamsky’s office at Sarov one day in 1961 to show him a story. It was Leo Szilard’s short fiction “My Trial as a War Criminal,” one chapter of his book The Voice of the Dolphins, published that year in the US. “I’m not strong in English,” Adamsky says, “but I tried to read it through. A number of us discussed it. It was about a war between the USSR and the USA, a very devastating one, which brought victory to the USSR. Szilard and a number of other physicists are put under arrest and then face the court as war criminals for having created weapons of mass destruction. Neither they nor their lawyers could make up a cogent proof of their innocence. We were amazed by this paradox. You can’t get away from the fact that we were developing weapons of mass destruction. We thought it was necessary. Such was our inner conviction. But still the moral aspect of it would not let Andrei Dmitrievich and some of us live in peace.” So the visionary Hungarian physicist Leo Szilard, who first conceived of a nuclear chain reaction crossing a London street on a gray Depression morning in 1933, delivered a note in a bottle to a secret Soviet laboratory that contributed to Andrei Sakharov’s courageous work of protest that helped bring the US-Soviet nuclear arms race to an end.