Important update 7/21-15: Please see comments below on the really low quality of the data. I was originally serious about this analysis taking the IQ data at face value, but now want to state that while I do find the aspect of the flag colors amusing, I totally do not trust the IQ data.

If your country has green in its flag, then you are less likely to be intelligent.

If that isn’t an explosive statement, then I don’t know what is. But data from Raven-online suggest that this is true.

In this figure is 183 countries ranked by average IQ from left to right. The higher average IQ the further to the right they are plotted. Countries that have green in their flags have a green spot, and all other have a red spot:

It has been demonstrated that there is a 70% correlation between the results of this test and educational achievement. Consequently, the higher your result in this test the greater your chances of success at higher levels of study. By comparison, the correlation factors in other IQ tests have an average variation of between 20 and 60%.

70% is a very strong correlation, and they are probably right to point out that the strong correlation between IQ and level of education is not spurious. And yet, I think they got causality the wrong way around.

They are implying that if you have high IQ, then you have a higher the chance that you can successfully attain a higher educational degree. But look at the top ranked countries: Italy has some green in their flag and an average IQ score of 102. The countries ranked higher than Italy are Hong Kong, Singapore, South Korea, Japan, and Taiwan – all affluent Asian nations that emphasize book-studies from a very young age. Many, if not all, of these countries make middle-schoolers take tests, and these tests matter for their future. They are, in other words, trained to take tests. Their school systems are good at making students do well on tests. Compare that to poor counties like Djibouti, Lesotho, Gabon, and Equatorial Guinea, who all have green in their flags. They are poor countries, which obviously negatively affects education, which then doesn’t allow children to practice taking tests very much (which I am not particularly in favor of anyway, I have to say).

You can practice taking tests, and it will affect your score. If that wasn’t true, then there would be no point in practicing taking tests, which is something teachers everywhere make their students do.

So rather than IQ affecting education, I posit that it is education that affects IQ. That doesn’t sound nearly as sexy (nor is it novel), and Raven is in business of selling IQ tests. They would like IQ to say something about your chances in life, whereas the truth is more likely that the more chances you
have in life, the higher your IQ is likely to be.

The really interesting question here is what causes the correlation between average national IQ and having green in the flag. You could very well argue that it’s completely spurious: just because there isa correlation does not necessitate that there is any causation. It is difficult to argue against such a proposition – there exists lots of very intriguing but probably completely random correlations, such as yearly deaths by drowning in a pool vs. the number of movies Nicholas Cage has appeared in. However, those strange and unexplainable correlations are found by cherry-picking many, many more random pairs of variables. The correlation between IQ and green in flag is a one-shot observation, which makes it stand out. The task is then to come up with plausible explanations for the relationship.

Start by noting that there is a positive correlation between national income, education, and average IQ. It makes sense. We then observe that having green in the flag increases IQ: “smarter people dislike green”. Maybe there is an effect of having green in the flag on national income: “green makes people lazy” or “other counties prefer not to trade with ‘green’ countries”: 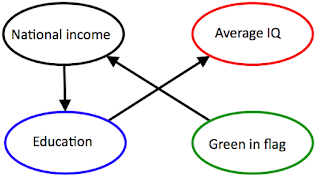 Other variables could be introduced. It seems to me that the “green” countries are for the most part warmer countries, particularly African. The closer countries are to the equator (lower latitude), the worse the average IQ is. Perhaps something about the latitude causes lower national income (Jared Diamond argue that coincidental geography is the main factor in explaining differences in national wealth among countries) and a preference for green? How about this: “people who live in environments where plants are green all year round are more likely to make their flags contain some green”. It could be some other psychological preference that is shaped by living at a lower latitude. 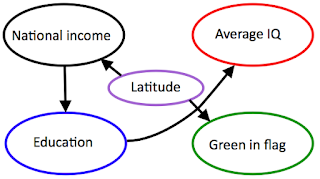 I am stumped. Maybe some historian would have something to say about the prevalence of green flags at lower latitudes?

These results are controversial and have caused much debate, they must be interpreted with extreme caution.

However, there’s probably little doubt that having an educated population does contributes to the national wealth, so causality is likely circular: wealth → education → wealth, with higher average IQ (i.e., test-taking abilities) as a side-effect. – See more at: http://pleiotropy.fieldofscience.com/2015/07/having-green-in-your-flag-is-bad-for.html#sthash.uOOW3Bzp.dpuf