Me with the SOAR Telescope

The visit of SOAR was not on our original itinerary, but I asked to visit and my wish was granted (thanks Tim Spuck!). SOAR is just a jaunt down the road from Gemini on the same peak of Cerro Pachon. The reason I wanted to go was because my employer, the Physics-Astronomy department at MSU is one of the major partners for SOAR. Several of our faculty and students actively use the telescope. Most of them observe remotely using a control room we have on campus. This means that some of the people who use the telescope have never actually physically been there. This seem unfathomable for those of us in ACEAP who relished the chance to visit. However, MSU has guaranteed time on the telescope every month and I can understand why travel to and from Cerro Pachon monthly could get exhausting.

SOAR Telescope Observing Room on the first floor of the Biomedical Physical Sciences Buildings on the MSU Campus!

A view inside. It has windows, so you can take a look inside. You likely won’t find astronomers in there during the day very often.

The name SOAR stands for the Southern Astrophysical Astrophysical Research Observatory.  It is a collaboration between the National Optical Astronomy Observatory, Ministerio da Ciencia e Tecnologia of the Federal Republic of Brazil, the University of North Carolina at Chapel Hill, and of course MSU. As part of being an partner each institution agreed to finance a portion of the building costs as well as build and provide an instrument for use on the telescope.

For MSU’s part, they provided the Spartan Infrared Camera (SIC) designed and built by Professor Ed Loh along with several students, some of which went on to continue working for SOAR after graduation. What I found supremely fantastic is that this instrument was truly a local endeavor. Professor Loh and his team designed it and our Physics-Astronomy machinists* built several of the pieces. Pieces too big for them to make on campus were built instead by machinists in Williamston, a town just down the road from East Lansing. The exterior was painted by a Michigan company that specializes in car bodywork and it was painted in Chevy White. There’s this great piece of mid-Michigan all the way down in Chile helping science move along. To me, that is just really cool.

Speaking of science, there is some great and interesting work our astronomers are able to do with SOAR here at MSU. SOAR is only 4 meters in diameter, half the diameter of Gemini. Though, it’s still an impressive telescope. Plus, that guaranteed time allows our astronomers to use SOAR to projects that require a lot of observations or may be considered risky by the community, therefore making it difficult to obtain time on other telescopes.

The crab nebula as seen with the Spartan Infrared camera aboard SOAR. This is a false color image with multiple wavelengths stacked. Red shows the knots of molecular hydrogen, green is atomic hydrogen.

Professor Ed Loh now uses the SIC to study molecular hydrogen in supernovae, most notably  in the Crab Nebula. The SIC is particularly useful for this because there is a strong emission line or wavelength of light that molecular hydrogen emits in the infrared.

When we talk about Hydrogen in astronomy, we tend to talk about atomic Hydrogen — a proton and an electron. What we are taught in school about these is an electron orbits around the proton in discreet energy levels. Something (such as light) can excite the electron to a higher energy level or orbital in the hydrogen. It then falls back down to a lower energy level. To conserve energy, that fall to a lower energy emits a photon with the exact energy difference between the two levels. Since these levels are always the same, we can get a lot of photons of the same wavelength. It takes atomic hydrogen a tiny fraction of a second for this process to happen and we see this light everywhere.

Molecular hydrogen, on the other hand, is a more complex structure of two bound hydrogen atoms, but can also emit photons like this. However, the time it takes for the electron to fall to a lower energy level is months. This makes it difficult to find in the universe because molecular hydrogen is likely to be broken down more quickly than it has time to release photons. This is especially true in supernova remnants, which have a lot of high energy radiation. However, Professor Loh has found knots of molecular hydrogen in the Crab Nebula. He thinks this might be regions with extra-dense gas protecting the knots, but is working on observing more supernova remnants to understand this further.

However, evidence in radio light has been found that suggests black holes are in globular clusters. More evidence in other bands of light needs to be found to confirm they are black holes though. Specifically, astronomers would need to find a companion star around suspected black holes and measure how fast it orbits This will help determine the mass of the candidate black hole. If we have something significantly massive and there’s no light, it’s probably a black hole. Professor Chomiuk and Professor Strader are using SOAR to systematically look for bright red giants to if they have a characteristic “wiggling,” suggesting they are orbiting around an object. Since this requires a systematic monitoring of globular clusters to find these candidates, the guaranteed time on SOAR is very useful. If they find something, they can then use that to get time on larger telescopes in other wavebands to do more precise observations to more tightly confirm black holes are there. The number of black holes in a globular cluster can give us insight into the evolution of these massive cluster.

Professor Megan Donahue and her student Tom Connor also use SOAR on a project involving black holes, only much bigger ones. They are working with Professor Mark Voit at MSU and other collaborators to further our understanding of the role supermassive black holes play in the evolution of galaxies. Most galaxies have supermassive black holes in their centers. The mass of those black holes are related to the mass of the host galaxies, so it seems their evolution is tied to one another, but exactly how? We also know that these black holes can feed off of massive disks of material at times, resulting in what we call Active Galactic Nuclei. These active galaxies release large amounts of light in the radio and X-ray and have jets of material jutting out of the galaxies.

Galaxies also have hot gas in them. This gas can cool and eventually form stars. However, that doesn’t always seem to happen. Professor Voit suggests that at times this hot gas can rain down onto the black hole, turning it “on” resulting in jets. The jets reheat the gas in the galaxy and quench star formation. Tom Connor and Professor Donahue’s work with SOAR is specifically looking at the brightest galaxies in clusters to measure the star formation rate, a piece to understanding these processes. The fact they have guarateed time means they can look at many galaxies at different levels of activity.

SOAR is a great piece of MSU down in Chile and I am so glad I got to go. I spoke in another post about how I never got to travel to observatories as part of my work in grad school. But here I was lucky enough to travel to the observatory that MSU uses a lot and see in person where these observations are taken to move science along. 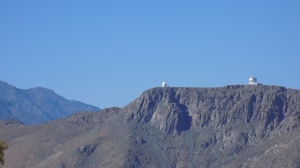 SOAR and Gemini as seen from Cerro Tololo. SOAR is on the left

SOAR as seen from Gemini. Photo by Jim O’Leary.

*A quick shout out to our machinists, especially Tom Palazzo and Tom Hudson. They do beautiful work in all they do. They are often over at the Planetarium helping us out. They even custom designed and installed a trough for our LED lights to sit so they would not be conspicuous and would give the best distribution of light possible. They are just wonderful guys to work with. When I heard they helped machine parts of the Spartan Infrared Camera, I thought “of course they did, who else would do such great work when needed.” Thanks Tom and Tom for all you do!*

I am the director of the Abrams Planetarium at Michigan State University. I love astronomy and love that I get to spend my time thinking about how to share that love with others. I am also an avid crocheter and I constantly look for new projects, space themed or otherwise.