Right now I’m working on the historical background to my dissertation, which means reading a lot of historical texts and history books on early medieval England. As an archaeologist, I’ve been trained to find direct evidence of events and not to rely on text- so I’ve been struggling a little with accepting the interpretations I’m reading. I keep thinking- where is the evidence of that? If indeed the Angles, Saxons and Jutes invaded Britain in the mid-5th century, wouldn’t there be evidence of the mass killings reported by historical texts? Of course, just because someone wrote it down doesn’t mean that it happened- many of the texts from around that period had specific religious or political purposes, so the history was likely skewed to their viewpoint. On the other hand, just because we can’t find the archaeological evidence, doesn’t mean it didn’t happen. Maybe we just haven’t found them yet…

A contemporary illustration of Michael the Brave defeating the Turks at Târgovişte in October 1595, by via Wikimedia Commons

At the end of the 16th century, the Principality of Wallachia (now Romania, and no, Vlad the Impaler was not involved in these battles- I checked) had allied with the Hapsburg monarchy against the Ottomans. This series of costly and violent battles, known as the Long Turkish War, would last for 15 years and lead nowhere- it was indecisive. Bucharest was one of the battle sites for the rebellion of the Wallachians against the Ottomans. However, to date there has been no archaeological evidence of the thousands of individuals who died in this battle.

During archaeological excavations conducted in 1972 and 2010–2011 in Bucharest, Romania, a cemetery was discovered. The archaeologists determined that the 688 excavated graves belonged to the Saint Sava Church Cemetery, which was in use from the 16th to 19th centuries. On the western boundary of the cemetery, an unusual burial was discovered- a mass grave containing three individuals. A recent report published by Constantinescu et al. (2015) examines these three individuals in order to determine who they were and why they were given an unusual burial. The skeletons were found with their arms splayed, faces down or to the side, and appear to have been thrown into the bottom of a circular pit. The backfill used to cover the bodies contained charcoal, animal bone, bricks and ceramic fragments. In addition to this, they found a musket ball by the neck of skeleton 2 that was used by the Romanian Principalities military from 1593 CE and after, and an arrow head by the chest of skeleton 2 that is associated with weapons used by the Eastern armies (Wallachian) during the 16th and 17th centuries. 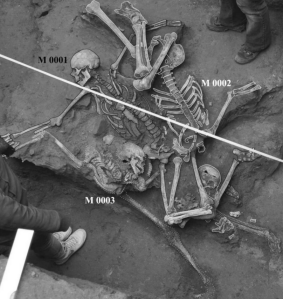 Analysis of the bone revealed that skeleton 1 belonged to a man aged between 33-45 years, who had poor dental health, mild osteoarthritis, and based on periosteal (abnormal bone growth) reactions to various bones likely was suffering from an infectious disease. Skeleton 1 had nine antemortem lesions (before death) including a healed fractures in his collar bone, ulna, ribs, two vertebrae and his nose. Skeleton 2, the one found with the bullet and arrow head, was around 33 years, and also had bad dental health and mild osteoarthritis. He had healed fractures on his scapula and patella. Skeleton 3 was younger, between 22-32 years old, with similar dental health and osteoarthritis as the other two. He had no evidence for antemortem trauma. All three demonstrate occupational stress associated with moderate repetitive physical activity throughout their life, indicating they were doing activities involving lifting, throwing, moving heavy objects, walking long distances, and crouching for long periods of time. Analysis of the perimortem injuries can help determine what was occurring around the time of death for these three individuals. Skeleton 1 had 2 perimortem inuries, Skeleton 2 had 18, and Skeleton 3 had 4. 14 of the 24 perimortem injuries identified were on the skull, and 19 of them were caused by sharp instruments.

When compared with the general buried population at the Saint Sava Church Cemetery, it becomes clear that these men were involved in something much more violent. Their health is generally worse, they have far more evidence of trauma, and they were buried in an unusual, likely negative, manner. Constantinescu et al. (2015) propose that these three men fought and died during a violent episode in Bucharest, most likely the rebellion against the Ottomans in 1594. Their injuries are consistent with weapons used during the Long Turkish War battles, with sharp force trauma matching the sabres and daggers, blunt force trauma from maces, and penetrating trauma from bullets of pistols or muskets. Execution for criminal behavior was ruled out as a possible reason for their deaths since it usually was hanging or decapitation. The archaeologists conclude that these men were likely Wallachian people who died defending their city, evidence by their burial which wouldn’t have been done had they been Ottoman.
This type of analysis helps us better understand exactly how historical events unfolded. For this particular series of battles, two texts exist- one from the Romanian perspective and one from the Ottoman perspective. In order to determine what really happened, we need archaeological evidence. As more research is done on these individuals, and *fingers crossed* more sites like this are found, we can learn more about this important event in Eastern European history.
Works Cited