I grew up out in the country in Iowa. Our address was RR1 = “Rural Route 1” :-)  We had a creek, pond, dirtbike (motorcycle) track, and other fun stuff on our property. One of the things I enjoyed most was target shooting and plinking with my .22 — I’d just walk out the back door and start shooting. With my scope zeroed in I could easily hit a squirrel at 50-100 yards from a standing position.

I haven’t had a gun since I left for college, but now that I have kids and live in a gun friendly state, I thought I might get back into shooting a bit. There are two good ranges (one free) near my house, and my kids are at an age where they can learn gun safety and how to shoot. My wife disagrees, but to me knowing how to handle a gun is a basic life skill.

Gun technology has matured quite a bit since I was a kid. There is amazing stuff available at reasonable prices (red dot scopes!). With YouTube I got up to speed on the new gear really fast. You can’t get a look at the internals of most guns while they are at the store, but online you can find complete disassembly videos.

This is a 3 lb semi-auto .22lr (all polymer except the barrel and firing mechanism) available for just over $100 (Mossberg Blaze): 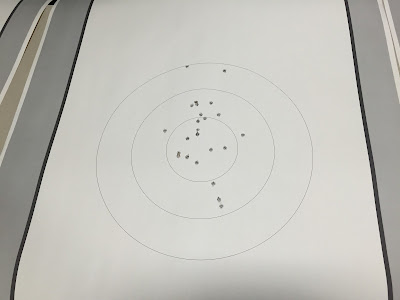