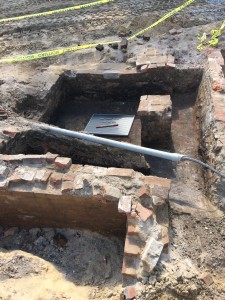 Overhead image of the excavated privy

During the summer, CAP field crew members excavated the remains of a privy on campus. For those not in the know (including myself until a couple months ago), a privy is a historic outhouse. Historic archaeologists have great interest in privies because they often contain artifacts of the past that people tossed either intentionally or accidentally down the deep, dark hole never to be seen again (so they thought).

When I was talking to Dr. Goldstein about my CAP projects for this semester, she suggested I research privies. My plan was to read the academic literature about historic outhouses in addition to searching the University Archives for information about privies on campus. However, a quick google search of “historic outhouses” led me down an interesting path: I found many popular culture articles about amateur diggers who specialize in excavating outhouses. Some news articles even quoted the excavators as saying that they bought properties because they knew there was a privy on the site and they were intent on digging it. The more I read, the more I found – there is even an Outhouses of America website where you can buy a Kleenex holder shaped like…you guessed it…an outhouse. I began to remember some bits and pieces I’d heard over the years about outhouse races and outhouse building contests, but what really struck me was that many outhouse enthusiasts are also interested in excavation of the privies. I can’t say I blame them – I’d want to be involved in a historic dig too.

This all got me thinking about access to the historic past. I work at prehistoric sites mostly and it is a foregone conclusion that those sites can and should be dug only by experts who are sanctioned by the government. Anyone considered a non-expert who chooses to dig at the sites is in breach of the law and considered a criminal – seems reasonable! However, what about these historic outhouses? Is it okay to dig these because they are on private property or because they aren’t considered sites? I went to Deadhorse Bay in Brooklyn a few weeks ago and had the same thoughts. An historic landfill is leaking out into the bay, exposing old bottles, toys, shoes, plates, and more that visitors are routinely pick up and take home. Being there made me feel a little uncomfortable, like I was complicit in looting a place that had untold historic value (full disclosure: I went home with a dead horseshoe crab for my friend’s kid).

Anyway, I digress! I’m sure that in my search for more historic outhouse knowledge, I will come across more pop culture surprises. However, I’m going to move on to the next phase of my research and begin to search the University Archives for clues regarding the privies. Because they were A) necessary and B) probably built with college money, I would expect to find some record of them in the Archives. Perhaps these clues can lead CAP to a future excavation site!

P.S. I regret to inform you that the Outhouse Museum of South Dakota is closed, but if you are interested in a comparative international analysis you can still visit the Museum of the Outhouse in Nova Scotia: http://www.rossignolculturalcentre.com/outhousemuseum.html