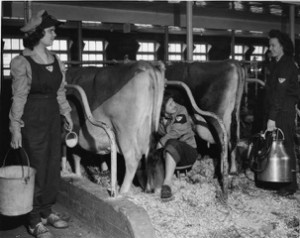 My goal for CAP for this semester is to continue to research sustainability in food practices at MSU. Previous blog posts have discussed some of these topics, including the role of women and the entire local community during World War II in programs such as Victory Gardens. These types of activities supplemented the community’s and MSU’s resources by providing local food that could be sold inexpensively or canned for future use. These acts and large-scale participation also encouraged a sense of community in itself, especially during a time of nation-wide stress.

World War II had other significant impacts on MSU’s campus; one of which was the depletion of male students who had left to serve in the war. Looking through course catalogues from the same time period, it is clear how large the impact was on the number of students enrolled in the college. For example, the class numbers listed for the 1942-43 year consisted of around 521 men and eight women in the agricultural department alone. These numbers dropped dramatically in the following academic year, with a total of 93 men and ten women enrolled in the agricultural department. 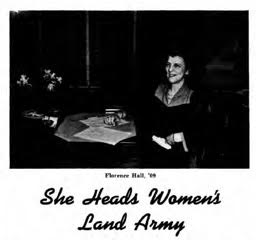 Because much of the work that was required for agricultural majors required not only laboratory work, but also manual labor, including farm and dairy work, this lack of enrollment, especially in the agricultural department, required alternative solutions to maintain these industries on campus and also across the nation. In order to keep up with demand for agricultural products, many institutions turned to women to fulfill these duties, much like what was also done for industrial needs (i.e. Rosie the Riveter).

Therefore, in addition to activities such as victory gardening, other programs were created that were aimed at supplementing the loss of male farm workers. One of these programs was the Women’s Land Army, which was established in the United States during WWI and was based on programs that were already in existence in other countries, such as in Great Britain. This national program consisted of women who replaced the male farm workers who had left to serve in the army. Interestingly, during WWII the program was headed by Florence Hall, a 1909 home economics graduate of MSU, who had taught school in Lansing, MI and worked at the Department of Agriculture under the Bureau of Dairy Industry after her graduation.

In order to support this effort, MSU offered a short course for women in order to train them to work in “dairy, poultry, and general farming”, which took place on campus during the fall of 1943. This course was “designed to give women opportunity to obtain good training to fit them for patriotic service in agriculture”. Instruction during the course consisted of a heavy workload of six days per week, six to eight hours per day for a total of four weeks. Women enrolled in the course learned many skills including care of animals, milking, making cheese, and use of machinery. The cost of the course, including room and board, was provided to the women enrolled. 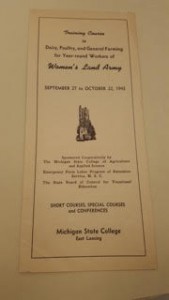 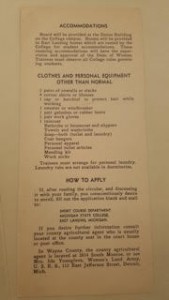 Overall, this program had a dramatic effect on agricultural production during the war, while also demonstrating that women could efficiently work in the same types of industries that were typically attributed to men.

For more information about the Women’s Land Army and Florence Hall: https://www.archives.gov/publications/prologue/1993/winter/landarmy.html

Nicole is a doctoral student in the Department of Anthropology. Her interests include bioarchaeology and mortuary archaeology of the Midwest. Her focus is on an archaeological culture, known as the Oneota, and the reconstruction of the mortuary and taphonomic processes that lead to fragmented human remains.