Throughout its years of survey and excavation at Michigan State University, the Campus Archaeology Program has found only one pre-contact archaeology site on campus; that is, a site that pre-dates the arrival of Europeans into the region. Thus the majority of CAP’s research has concentrated on exploring the history of the university itself, which is a decidedly Euro-American history, without being able to delve into the much deeper story of the Native American societies that occupied this land for thousands of years before. This is not a purposeful oversight by CAP; cultural resource management must deal with sites found at the cost of the types of sites that are not found. The scarcity of pre-contact sites therefore made this discovery an archaeological delight, allowing us to further our understanding of the American Indians peoples who occupied and utilized the land we now know as Michigan. 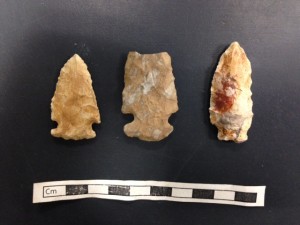 In 2010, CAP discovered a site that was comprised of a hearth, several projectile points, and a handful of lithic debitage in the “Sacred Space” area surrounding Beaumont Tower in the heart of campus. The style of the projectile points allowed archaeologists to date the site to the Late Archaic period, approximately 3000 years ago (a striking age in comparison to the mere 150-year history of Michigan State University). Late Archaic peoples were mobile hunter-gatherers, moving across the landscape exploiting seasonally available food resources. While these societies had yet to adopt and use pottery technology, they were increasingly living in one place for longer periods of time and sending out small parties to hunt or gather certain resources. These “logistical” parties often traveled far enough from their home base that they needed to set up small, temporary campsites. The Beaumont prehistoric site appears to be one of these campsites, with discarded hunting tools (projectile points), chipped stone debris from manufacturing and sharpening tools, and a hearth used by the site’s occupants to cook food and stay warm. The MSU campus is essentially situated in a swampland, which while advantageous for hunting and gathering a great variety of resources, would not have been a pleasant place to stay. However, this site is located on one of the highest, sandiest, and driest points on campus, making it a prime camping spot. 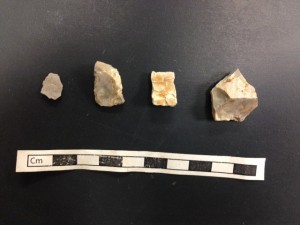 It might be hard to imagine the Michigan State campus as it was before MSU was ever a thought in anyone’s mind—as a vast, resource-rich wetland—but it is perhaps more difficult, and certainly more uncomfortable, to imagine the Native people who lived on this land for thousands of years before Euro-Americans claimed it as their own and transformed it beyond recognition. Failure to acknowledge this deeper history would be a travesty. This year I will conduct the final analysis of the materials from this small but important site and strive to publish the results so that others might learn about a very different yet vital part of central Michigan history. I look forward to contributing to the awareness and understanding of past Native American peoples, because Michigan State was theirs long before it was ours.