One of the major tasks for the semester (in reality probably the entire school year) is to sort, catalog, and accession the artifacts from the Summer 2015 field school. The five units produced an astounding volume of artifacts. We began the field season under the impression that the trash pit was associated with the Bayha Home Management House that occupied Professor Gunson’s home after his death in 1940. However, preliminary analysis of the artifacts date the assemblage to from the 1890’s-mid 1920’s, excluding the Home Management House as the culprit. It became necessary to investigate Professor Gunson, and his time in the house further. 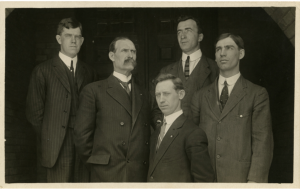 Thomas Gunson was born in Moffat Scotland on July 4th, 1858. He apprenticed as a gardener in England, and later worked in nurseries in England and Scotland. In 1882 he moved first to Quebec, and later to Michigan, where he worked on a farm in Saginaw. There he meet his first wife, Annie Rose. Annie was a good friend of Mrs. Abbot, wife of T. C. Abbot (Michigan Agricultural College president from 1862-1885 and long time professor). It was Mrs. Abbot who influenced Gunson to visit the campus in 1891. On the coach ride to East Lansing he met Mrs. Beal, wife of professor William J. Beal of the botany department. Mrs. Beal arranged for Gunson to meet with college president Oscar Clute and Levi Taft, a professor of horticulture. Mr. Gunson’s horticultural experience was apparent, and he was hired as a foreman of the grounds and moved to East Lansing April 1, 1891. That fall he moved into the campus greenhouse residence where he remained until his death in 1940. His obituary in the January 1941 issue of the MAC Record describes him as, … “the gardener, the counselor, the philosopher, the honest citizen.” 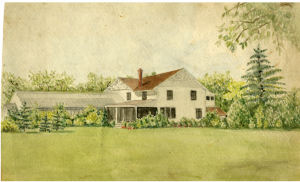 Mrs. Anne Gunson passed away in April 1913, following a long illness. Mr. Gunson later married their housekeeper, Lutie Robinson in August of 1914. The Gunson residence was remodeled in approximately 1924. The proposed blueprints (dated 8/13/1923) detail major changes to the structure including leveling floors, new plumbing, new kitchen sink, connecting two rooms together, making cloak closet into a pantry, new front door, covering windows looking into the Greenhouse, new radiators, and new cupboards. We’re currently proposing that the field school assemblage is the result of the Gunson house remodel. It’s possible that the debris was dumped directly into its location behind the current Administration building at the time of the remodel, or moved there are a later date in an effort to fill in the riverbank. The combination of the proximity of the house, the mid 1920’s end date to the artifacts, and the high end nature of the artifacts supports the Gunson house as the most likely originator of the trash pit. 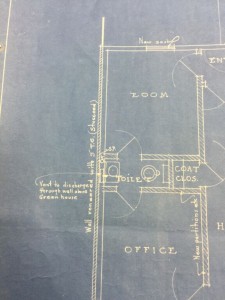 As we go through the rest of the field school artifacts I hope that we can tighten the time frame, and get a better idea of the household and lab equipment present.