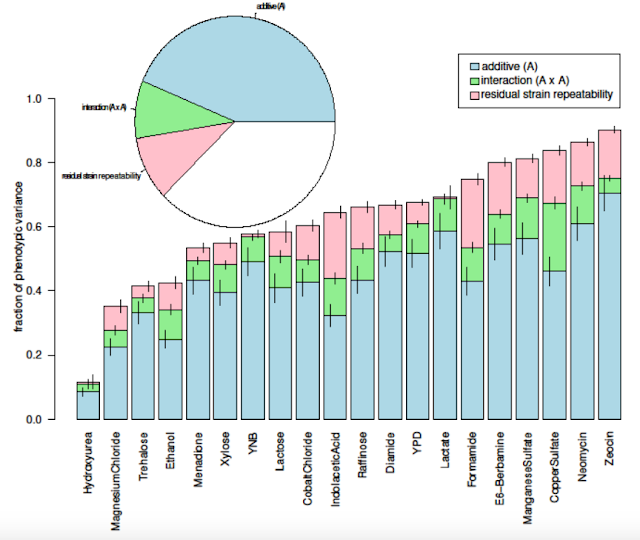 A new paper from the Kruglyak lab at UCLA shows yet again (this time in yeast) that population variation in quantitative traits tends to be dominated by additive effects. There are deep evolutionary reasons for this to be the case — see excerpt below (at bottom of this post). For other examples, including humans, mice, chickens, cows, plants, see links here.

Genetic mapping studies of quantitative traits typically focus on detecting loci that contribute additively to trait variation. Genetic interactions are often proposed as a contributing factor to trait variation, but the relative contribution of interactions to trait variation is a subject of debate. Here, we use a very large cross between two yeast strains to accurately estimate the fraction of phenotypic variance due to pairwise QTLQTL interactions for 20 quantitative traits. We find that this fraction is 9% on average, substantially less than the contribution of additive QTL (43%). Statistically significant QTL-QTL pairs typically have small individual effect sizes, but collectively explain 40% of the pairwise interaction variance. We show that pairwise interaction variance is largely explained by pairs of loci at least one of which has a significant additive effect. These results refine our understanding of the genetic architecture of quantitative traits and help guide future mapping studies.

Genetic interactions arise when the joint effect of alleles at two or more loci on a phenotype departs from simply adding up the effects of the alleles at each locus. Many examples of such interactions are known, but the relative contribution of interactions to trait variation is a subject of debate1–5. We previously generated a panel of 1,008 recombinant offspring (“segregants”) from a cross between two strains of yeast: a widely used laboratory strain (BY) and an isolate from a vineyard (RM)6. Using this panel, we estimated the contribution of additive genetic factors to phenotypic variation (narrow-sense or additive heritability) for 46 traits and resolved nearly all of this contribution (on average 87%) to specific genome-wide-significant quantitative trait loci (QTL). …

We detected nearly 800 significant additive QTL. We were able to refine the location of the QTL explaining at least 1% of trait variance to approximately 10 kb, and we resolved 31 QTL to single genes. We also detected over 200 significant QTL-QTL interactions; in most cases, one or both of the loci also had significant additive effects. For most traits studied, we detected one or a few additive QTL of large effect, plus many QTL and QTL-QTL interactions of small effect. We find that the contribution of QTL-QTL interactions to phenotypic variance is typically less than a quarter of the contribution of additive effects. These results provide a picture of the genetic contributions to quantitative traits at an unprecedented resolution.

It is a common belief in genomics that nonlinear interactions (epistasis) in complex traits make the task of reconstructing genetic models extremely difficult, if not impossible. In fact, it is often suggested that overcoming nonlinearity will require much larger data sets and significantly more computing power. Our results show that in broad classes of plausibly realistic models, this is not the case.

We introduce a statistical method that can reconstruct nonlinear genetic models (i.e., including epistasis, or gene-gene interactions) from phenotype-genotype (GWAS) data. The computational and data resource requirements are similar to those necessary for reconstruction of linear genetic models (or identification of gene-trait associations), assuming a condition of generalized sparsity, which limits the total number of gene-gene interactions. An example of a sparse nonlinear model is one in which a typical locus interacts with several or even many others, but only a small subset of all possible interactions exist. It seems plausible that most genetic architectures fall in this category. Our method uses a generalization of compressed sensing (L1-penalized regression) applied to nonlinear functions of the sensing matrix. We give theoretical arguments suggesting that the method is nearly optimal in performance, and demonstrate its effectiveness on broad classes of nonlinear genetic models using both real and simulated human genomes.

I’ve discussed additivity many times previously, so I’ll just quote below from Additivity and complex traits in mice:

You may have noticed that I am gradually collecting copious evidence for (approximate) additivity. Far too many scientists and quasi-scientists are infected by the epistasis or epigenetics meme, which is appealing to those who “revel in complexity” and would like to believe that biology is too complex to succumb to equations. …

I sometimes explain things this way:

There is a deep evolutionary reason behind additivity: nonlinear mechanisms are fragile and often “break” due to DNA recombination in sexual reproduction. Effects which are only controlled by a single locus are more robustly passed on to offspring. …

Many people confuse the following statements:

“The brain is complex and nonlinear and many genes interact in its construction and operation.”

“Differences in brain performance between two individuals of the same species must be due to nonlinear (non-additive) effects of genes.”

… The preceding discussion is not intended to convey an overly simplistic view of genetics or systems biology. Complex nonlinear genetic systems certainly exist and are realized in every organism. However, quantitative differences between individuals within a species may be largely due to independent linear effects of specific genetic variants. As noted, linear effects are the most readily evolvable in response to selection, whereas nonlinear gadgets are more likely to be fragile to small changes. (Evolutionary adaptations requiring significant changes to nonlinear gadgets are improbable and therefore require exponentially more time than simple adjustment of frequencies of alleles of linear effect.) One might say that, to first approximation, Biology = linear combinations of nonlinear gadgets, and most of the variation between individuals is in the (linear) way gadgets are combined, rather than in the realization of different gadgets in different individuals.

See also Explain it to me like I’m five years old.