What constitutes a feminist refugee politics?

This question is not new. But there are some particularities about the current crisis which demand that discussions of gender take a larger part in conversations than it has so far. Gender matters – it always matters. There are a couple of tropes that have been circulating which are specifically about gendered trends. One, which I have blogged about for the feministische studien, reflects the relationship between Kanzlerin Merkel and the CDU. To set up a binary: Merkel = female. The CDU (if we look at the photoshopped image from Die Welt below) = male.  (The caption reads: #MoreWomen Campaign. Without men Angela Merkel stands almost alone up there.) 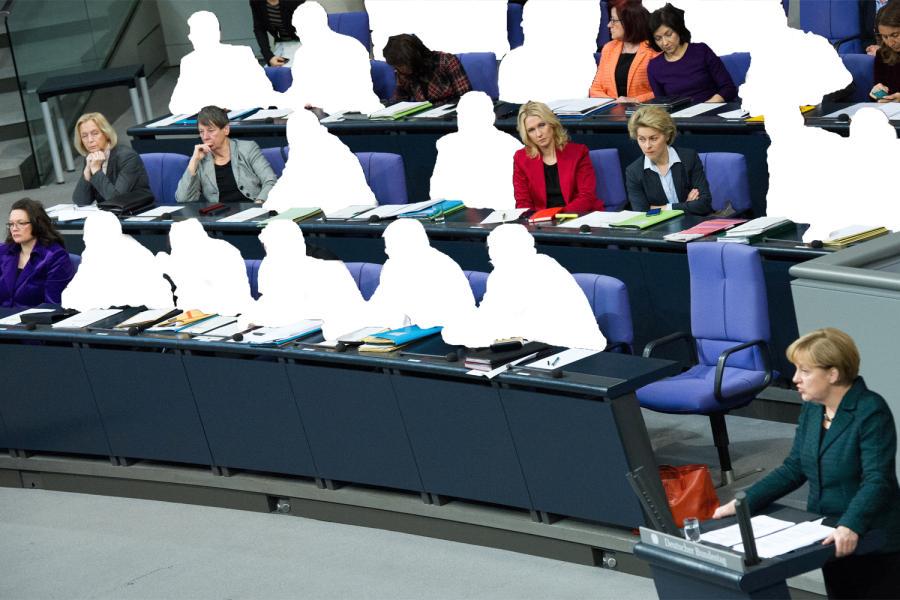 The ideological conflict between moderate CDU members and the far-right CSU is influenced in some way by this discrepancy in proportional representation between female head of state and male party members. There are masculine expectations for hard power which Merkel supposedly inadequately exercises, especially in the eyes of her sister party. And now to deconstruct said binary: It is more likely for the press or party members to discredit Merkel as a “monarch” or “Mama Merkel” than to acknowledge that Merkel’s experiences growing up under dictatorship in the GDR (East Germany) are historically legitimate reasons for reacting to this kind of humanitarian crisis with open arms. Merkel, in a beautiful moment of living standpoint theory, insists that she knows what it is like to live behind a closed border and that she is very well aware of the violence a sealed border requires. Thus her emphasis on sentences like “Fences don’t help.”

Another trope that has been given a lot of airtime is assertion that the refugees/forced migrants are 70% (or more) male. Given recent discrepancies brought to light by Nando Sigona on The Conversation, in an article which recounts his Twitter communications with Frontex that reveal that a large number of migrants might be counted twice, it seems increasingly urgent to use rigor in the ways that we quantify. While the majority may be young men, the racist associations of criminality, rape, assault and possible infiltration by religious terrorists rest on gendered fears of masculinity. The anonymous blog called The Syrian Boy has an interesting collection of images (the sources are unclear) which aim to disrupt that generalization.

According to this article in the Süddeutsche Zeitung, this is how the gender totals break down across age groups:

They list their source as raw data from eurostat.

According to statistics from the Federal Agency for Migration and Refugees in Germany cited in the SZ, in 2014:

The German feminist blog PinkStinks.de has published a recent post frustrated with the way these numbers are being interpreted as representing a threat to (White German) women. As they write on PinkStinks:

And while they [the editors of the magazine EMMA] raise important demands in order to protect women, they also swear on the image of a constantly assaultive Muslim man. “Our equality is in danger, too, when hundreds of thousands of mostly young men pour into our country.”

The line was crossed a long time ago. And not just at the point where demands for equality and more protection for women are used in the service of nationalistic interests, but also at the point where people who are fleeing are being instrumentalized in order to push through their own images of equality and more protection for women.

It is nothing new to cover up racism with assertions of needing to protect women. Laura Bush was used effectively by her husband’s presidency to argue for protections for women under the Taliban and to justify war after 9/11. Blue burkas pervaded the national imagery alongside the image of vicious terrorists. These are tropes with which the Right is all too familiar – not just in Germany, the EU or in the United States. Canada just had a presidential campaign in which the niqab was a potent political symbol. The HuffPost has an entire page devoted to niqab articles. Düsseldorf just banned the piece of clothing for elementary school mothers.

While women’s equality is being evoked by (male?) politicians in the service of nationalism, what do we make of this info graphic from a study conducted by the Humbolt University in Berlin about volunteers in serving this population? This tweet from the WDR (Westdeutsche Rundfunk) describes the exact opposite proportions of volunteers compared to refugees: 70% are female; 30% male. (The tweet comment reads: There’s room for improvement, boys!) 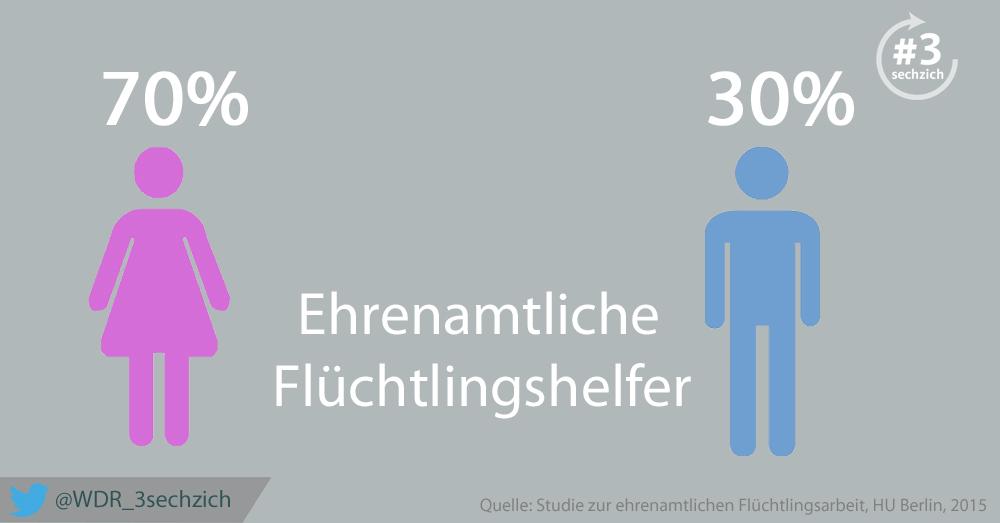 For right now, this is simply about gathering evidence that shows some of the points at which gender is functioning as political capital in the European crisis. Part II (to be posted later) will explore how these tropes and images can inform feminist refugee politics.