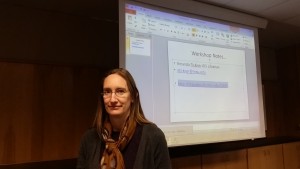 This week I went to a workshop at the MSU Library titled “Making a choropleth map with graduated symbols,” mainly because the only word I understood in the title was “map.” The workshop was led by Amanda Tickner, the new map librarian and knower of all things GIS (geographic information system). The workshop was mixed with geography students and GIS newbies and was thorough and slow enough to move along at a good pace. By the end of the workshop, I was confident that I too could make a choropleth map: “a map that uses differences in shading, coloring, or the placing of symbols within predefined areas to indicate the average values of a property or quantity in those area,”1 with graduated symbols: “A map with symbols that change in size according to the value of the attribute they represent. For example, denser populations might be represented by larger dots, or larger rivers by thicker lines”2.

So here are some basic things I learned about GIS for those of you are still unsure about it and what we can do with it. GIS is a visualization or analysis tool for spatial or geographic data. That is it. If you have some data that has spatial or geographic dimensions to it, for example something small scale like artifacts across a site or the ethnographic information for certain households within a neighborhood, then GIS may help you to visualize some of your data/information on a map. It also works for very large scale projects like showing specific sites across a country or, the workshop example, the distribution of residences with Masters of Arts degrees across Michigan.

There are two main software choices for GIS activities ARCH-GIS and QGIS. In the workshop I learned that they are both pretty much the same and can produce the same maps. ARCH-GIS is relatively expensive and is good if you need to make exceptional maps and for the most part has more power than you would probably need as an average user. QGIS on the other hand is free, open access, and will satisfy most if not all of your GIS needs. Also, QGIS runs on both MAC OS and Windows whereas you need additional software to run ARCH-GIS on a MAC. According to the workshop, QGIS is also much better than it was 5 years ago, so if you haven’t tried it in a few years, you might want to look at it again. There are a host of plugins (various extensions that can enhance your visualizations) that you can add to QGIS if you need specific features that may only be available on ARCH-GIS.

One of the coolest parts of creating interesting maps in GIS is obtaining the data sets. For most countries and even some localities a number of data sets are available through the internet for free or open access. You can also create your own data sets through a simple excel spreadsheet and import it into a GIS software. You can even combine these two types of data to create maps of your data with primary and secondary information. For example, some locations like MI have a surplus of free accessible information on their government website. If you collect data with a geographic component, you can add your new data to already present government data, like topography or median income, to help with your analysis.

So, if you find yourself near a GIS workshop here are a few definitions you might find helpful in creating a simple map:

Layer: “Conceptually, a layer is a slice or stratum of the geographic reality in a particular area, and is more or less equivalent to a legend item on a paper map.”5

Vector: “ Vector models are useful for storing data that has discrete boundaries, such as country borders, land parcels, and streets.”4

Bonus! Raster: “A spatial data model that defines space as an array of equally sized cells arranged in rows and columns, and composed of single or multiple bands. Each cell contains an attribute value and location coordinates. Unlike a vector structure, which stores coordinates explicitly, raster coordinates are contained in the ordering of the matrix. Groups of cells that share the same value represent the same type of geographic feature.”7

Stay tuned for the next installment from the second workshop titled “Georeferencing!”