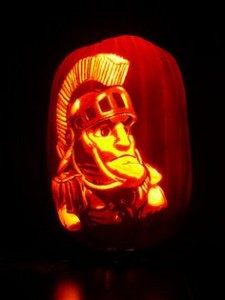 Halloween is a beloved day of the year, perhaps because, for some reason, we love to be scared. For many people, nothing causes more fright or fascination than ghosts, the spirits of those who have passed out of the physical world but whose lost souls remain behind. It is widely believed that ghosts remain tied to a specific place on earth because they died with unfinished business, often because they met an unfortunate end. Perhaps it is this terrible fate that makes us so terrified of them—they represent a soul never able to rest, even after death. Maybe this is also why we are so fascinated with not only ghost stories, but with the stories of those who became ghosts, to hear about the lives and often unfortunate circumstances of the deaths of these individuals, all in an effort to make sure that we, too, do not suffer the same fate.

Fascination with the lives of people in the past is what drives many archaeologists to do what they do, sifting through the layers of history (aka “dirt”), looking for scraps of the past. As mentioned in my previous post, I have been analyzing artifacts from a small Late Archaic site found by CAP on campus several years ago. This site consists of lithic debris and four projectile points. When I handle artifacts, I sometimes treat them as objects to be measured, weighed, and described, but once in a while it hits me: I am holding something another person crafted thousands of years ago. If you don’t know much about flintknapping (the craft of making stone tools), it is very difficult. Modern-day flintknappers are hobbyists, and it takes them years to hone their skills. However, for Archaic people, making tools was not a hobby, it was a necessity. Knives and spearheads for hunting and gathering were necessary for survival. While they did not have metallurgy or other “advanced” technology, they had an incredible depth of knowledge about which materials were best for making tools, how to best strike the stone to get it to flake in predictable ways, how to work around a piece of stone’s flaws to still make a viable tool. Not only that, but there are many ways to make a useful projectile point, so the exact shape was often determined by cultural preference. Thus when an Archaic flintknapper sat down, he applied not only his technical knowledge while crafting a tool, but he also pulled from knowledge taught to him by his father or other male kin and from the shapes and styles used by both other group members and by groups with whom they interacted. We will never know the name of the individual who made a particular projectile point, but we can still recreate the world in which he lived through archaeological research, such as his social sphere, his diet, his seasonal movements across the landscape, and what that environment looked like and how he exploited its resources.

This semester I have also been supervising undergraduate students in the CAP lab as they label artifacts excavated from historic sites on campus this summer. With the aid of historical documents, it is even easier to connect artifacts to individuals and delve into their lives. As Amy Michael pointed out in her most recent blog, a piece of souvenir glass that said “Lu 1905,” which she conjectured belonged to Lutie Gunson, wife of Professor Gunson. It makes one wonder, where did Lutie get that souvenir? Was it a gift commemorating a special occasion, or did she buy it while on a trip? We may never know the circumstances of how Lutie acquired her souvenir or when it was broken or disposed of, but archaeology has brought us closer to knowing her. She was not just another name in the records, but a person who once transformed her house on this campus into a home using personal keepsakes, just as many of us do today.