Last Thursday was our second annual Apparitions and Archaeology Haunted Campus Tour. With the help of the MSU Paranormal Society we held a public tour with six stations across north campus. Although the weather was less than cooperative (on and off rain with temperature in the low 40s) 75 brave people took the tour. It was there that we officially introduced Mable. 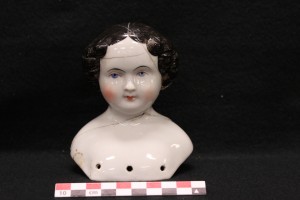 During the excavation of the west circle privy in June we discovered a porcelain doll, who we have named Mable. She’s remarkably complete, and her hair style (flat-top) indicates that she dates to the 1860s. Finding the doll was both startling, and amazing. We don’t have many artifacts linked to children. A doll is also a wonderful talking point when explaining archaeology to young people. However, even though she glued back together wonderfully, she’s still very fragile. Enter 3D scanning and printing.

CAP fellow Blair Zaid previously discussed her foray into 3D scanning and printing last semester. We once again called on the expertise of the Lab for the Education and Advancement in Digital Research (LEADR) to scan and print Mable. Scanning the doll presented some unique challenges.

Mable is both delicate and top heavy. That made using the rotating scanner out of the question, so we turned to photogrammetry. Photogrammetry involves combining many still photographs of an object with precise measurements in order to build a 3D model. We were worried that Mable may have been too shiny, and that would cause distortion in the model. However we compensated for this by increasing the resolution of the photos. 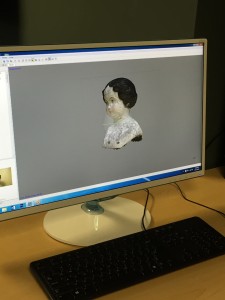 We first printed Mable in solid white, but then decided to have some fun. 3D printing filament comes in a variety of colors, including glow in the dark. I figured that a glow in the dark doll head would be the perfect addition to our Haunted Tour. But we didn’t stop there. One of the fun things about 3D printing is that you can control the size of the printed object. So we scaled her down, and printed glow in the dark necklace pendants. 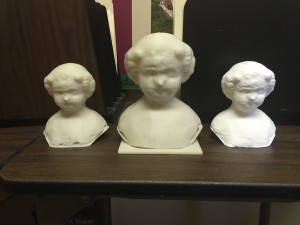 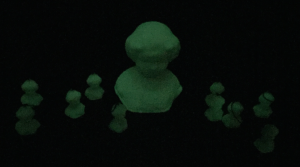 Glow in the dark prints

So now we have both glow in the dark, and standard white prints of Mable.  We plan to paint one of the white prints to match the actual doll.  Having 3D prints of excavated artifacts allows these objects to be handled by the public without fear of damage.  It’s also many peoples first time handling a 3D printed object.  3D printing is still new enough that although most people know what it is, they haven’t had the chance to encounter any prints yet.

We’re grateful for the hard work LEADR lab (specifically Brian Geyer) put into scanning and printing Mable.  We look forward to having more fun with the 3D printer. 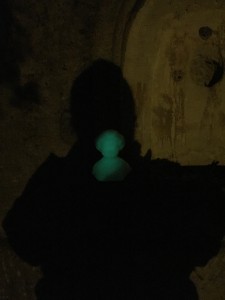 Mable on the Haunted Tour