At the Midwest Archaeological Conference, Lisa, Amy and myself got the opportunity to present some of our preliminary findings from the privy that we uncovered during Summer 2015. Here, I’m going to share some of the findings from our poster, and the poster itself for those who are interested!

In June, 2015 during routine construction monitoring, the Campus Archaeology Program survey crew noticed a disturbed area of bricks and dark soil. The salvage excavation determined that it was a brick privy. This is the only privy we have unearthed on campus, and date ranges from diagnostic artifacts (1850’s-60’s) indicate that this privy was used during the earliest years of the university.

The Agricultural College of the State of Michigan was opened to students in 1855, and consisted of two primary buildings: College Hall, the main classroom and library space, and Saints’ Rest, a dormitory. Rapid development and the poor construction of the buildings led to new structures being built, old structures lost to fire, and expansion of the campus across the landscape. Despite finding many of these early buildings, the Campus Archaeology program hadn’t discovered evidence of any privies or earth-closets.

Privies were variably constructed from brick, wood, or stone as small, sturdy receptacles for human waste before the invention of the flush toilet. Due to their necessity and use by individuals from all social tiers, privies are located across all manner of sites.

Often, items were discarded into privies due to either intentional disposal or accidental loss. The assemblages in privies often reflect a mixture of artifacts that hint at daily activities and lifeway practices, but these spaces were not used as everyday trash pits. Through disposal of artifacts into the dark hole of the privy, peoples of the past were unintentionally creating a unique cultural assemblage. Archaeological excavations of privies have ranged from Australian convict hospital grounds that revealed medical treatments performed on prisoners (Starr 2001), to archaeo-entomological investigations of insect species to understand displacement of native fauna (Bain 1998), to tracing the use of nightsoil practices in early major American cities (Roberts and Barrett 1984). Even early anatomical techniques can be reconstructed through privy excavation; a report of a privy on the property of a 19th century doctor contained human bones with evidence of postmortem surgical incisions (Mann et al. 1991). Beyond material culture, privies also contain botanical remains that can inform of historical subsistence behavior. 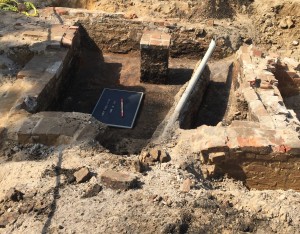 The privy was discovered on June 2nd, 2015 during routine monitoring of construction. The location of the privy is approximately 10 meters southwest of the first dormitory, and had been protected over the last century by the roadways that covered it. The majority of the artifacts and the nightsoil were concentrated in the northeast quadrant.

The structure consists of a brick wall creating a sunken area about 2 meters by 2 meters, and 0.25 meters deep. On the western edge, there are two angled chutes leading into the sunken area and a central brick pier or pedastal. We conclude that the building had two stalls, allowing multiple people to use the privy at the same time, and two chutes to allow for dumping and removal of nightsoil. The shallow depth and chutes tell us that this was an earth-closet, rather than a privy.

Artifacts from the Nightsoil 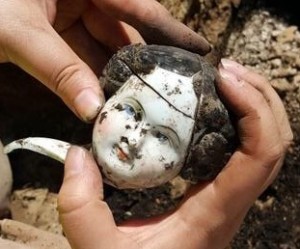 Part of the large porcelain doll

Dozens of artifacts were recovered from the nightsoil in the privy. Many of these have been found in other areas on campus: buttons, medicine bottles, inkwells, combs, floral and faunal remains, and more. It also revealed a number of unique artifacts and assemblages that add to our understanding of what it was like to be a member of the 19th century Agricultural College of the State of Michigan. These unique pieces include an entire set of dishware, violin-shaped cologne bottle, and two dolls, one complete figurine type and another consisting of the bust. Here are some of the amazing finds from the privy.

The lack of privies on MSU’s historic campus has always been a mystery, and this first find represents a major boon to our research. Over the next year, we will be looking more closely into MSU’s Archives and Historical Records in order to learn more about privies at MSU, analyzing the artifacts, and determining a more exact date range for the building. This building, despite its mundane function, provides us a unique glimpse into life on MSU’s 19th century campus.