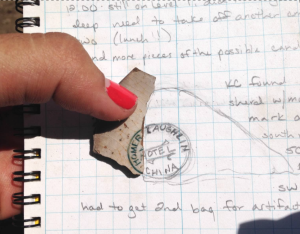 We’ve been chugging through cataloging the artifacts from the Admin/Gunson assemblage this semester. We should finish unit A sometime next week. This may seem like slow going, but to say that the artifacts are plentiful would be an understatement (6,951 thus far in Unit A with one more level to go!). In addition to the laboratory glass, gendered bottles, medicine bottles, household goods and building material, there are been a large amount of ceramics (which will be discussed later by intern Pa Vang). This isn’t terribly surprising since it is a early 20th century historic site, but the variety in the ceramic has been drastically different than other sites on campus. Only one unit in, we’ve already identified everything from utilitarian granite ware toilet wares, to French porcelain tea cups. One particular potter that has been appearing frequently is the Home Laughlin China Company. 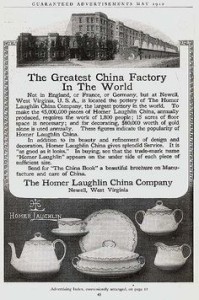 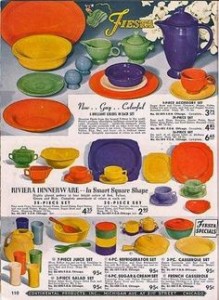 The most well known product of the Homer Laughlin China Company is undoubtedly Fiesta ware. Fiesta ware was created by ceramist Frederick Rhead in 1935, and discontinued in 1959. New colors were reintroduced in 1986 to celebrate the lines 50th anniversary, and are still available today.

In addition to household ceramics, the company also produced heavy vitreous ware for restaurants (which are still widely used today). This hotel ware is also present in the Gunson assemblage.  We have also found some of the more complicated patterns. 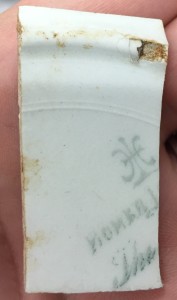 Makers Mark on back of Gold Plate 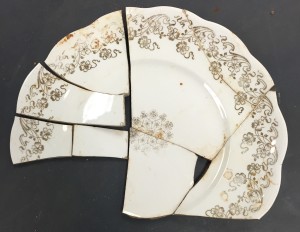 Gold Leafed Homer Laughlin Plate
Additional research is necessary, and we look forward to adding more to the Homer Laughlin story as we move through the other units.