Over the past few years various CAP fellows, including myself, have examined sustainability at MSU. In contrast to modern sustainability research, which has focused exclusively on the present and future, CAP has examined how past practices functioned and how these have changed over time. Through the use of both archival and archaeological evidence, how past people used food can be evaluated. These various food practices, and changes within them through time, can point to practices in sustainability.

As has been previously discussed in past blog posts, the Campus Archaeology Program has established time-based periods for the Michigan State University campus. Each one of these periods can be linked with physical and social changes, including those involving and affecting sustainability, both on campus and the neighboring community. These phases consist of: 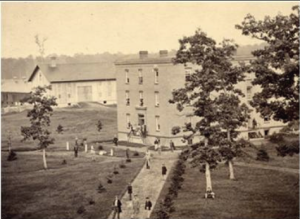 It is during the Early Years (1855-1875) of the University (then Michigan Agricultural College) that all of the students lived on campus in dormitories. These students, who were all male at the time, were an integral part of MSU, as in addition to studying they maintained the campus, took care of the livestock, and worked the campus agricultural fields. As an agricultural college, students grew their food locally, serving the dual purpose of teaching and providing them with their own food. The students often grew their own food nearby their dormitories, as at this time it would have been difficult to get fresh food to campus. CAP excavations of Saint’s Rest dormitory, which was the first dormitory on campus, built in 1857 and burned down in 1876, provided evidence of food practices as seen by faunal remains, ceramics, and glass found in trash pits. Historical documents from the time also demonstrate that students were raising, butchering, and consuming their own meat, as well as purchasing additional amounts of meat as a supplement. 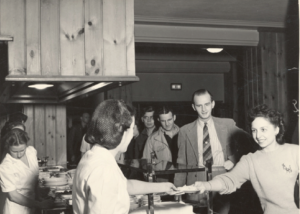 Serving Food in the Union Cafeteria – 1941, courtesy of MSU Archives

The second period of MSU (1875-1900) saw an increase in enrollment, due to the acceptance of women to the college in 1870 and the development of a women’s program in 1896. In order to feed an increased number of students, dining clubs were established on campus. Much of this food was still produced locally, both from on campus farms and from local, off-campus sources. 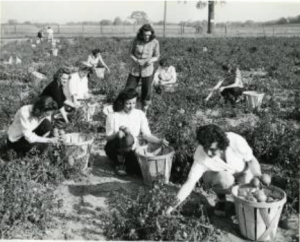 As the enrollment dropped during World War I, garden clubs were started on campus during the third period in order to supplement food resources. It was during the fourth period, and specifically World War II, in which the number of these gardens increased, now called Victory Gardens. Much of this produce was canned on campus in order to build up a supply of food during the war. Also due to the dramatic drop in male students, female students were now required to maintain the agricultural work on campus. The Women’s Land Army was one program that was established nation-wide in which women replaced male farm workers who had left to serve in the army. MSU also supported this effort on campus by offering a short course to teach women these skills.

Food production at MSU continues to this day, as can be seen in examples such as the Dairy store and the Meat Lab. From this review of food practices, it is clear that many of these early sustainable food practices continue on today. MSU also still values campus produced food, as seen in their hierarchy of food use, in which food produced on campus is considered first, then local, then regional, then responsibility produced products. 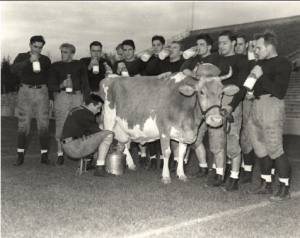 Nicole is a doctoral student in the Department of Anthropology. Her interests include bioarchaeology and mortuary archaeology of the Midwest. Her focus is on an archaeological culture, known as the Oneota, and the reconstruction of the mortuary and taphonomic processes that lead to fragmented human remains.