Light bulbs, everyone has them in their homes, work, and public buildings. And although light bulbs have changed in recent years with the introduction of LED and CFL bulbs, for the most part when you think of a light bulb a specific design comes to mind: an Edison style incandescent light bulb.  Historic archaeologists often encounter the material remnants of various electrical artifacts, such as the white porcelain knobs, tubes and cleats used in knob and tube wiring systems (see Myers 2010 for an excellent overview).  We also encounter light bulbs, although perhaps less often due to their fragile nature. Just as electrical systems have changed over time, so has the light bulb.

In 1879 Thomas Edison created the first commercially practical incandescent light bulb. However, in the early years of electrification Edison wasn’t the only game in town. Inventors had been creating “light bulbs” since 1802, but they were often flawed designs that burned out quickly, or only partially worked.

Thus far while cataloging the Gunson assemblage we’ve encountered several complete and fragmentary light bulbs, including ones with paper labels. Most of these are laboratory light bulbs produced by the Shelby Electric Company. We were able to figure this out because remarkably two of the bulbs still have their paper labels (pictured to the left). 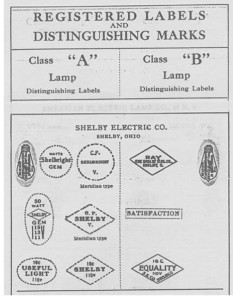 Perhaps the Shelby Electric Company is ringing a few bells (or flipping a few light switches). It produced what can easily be called the most famous light bulb in the world, yes a famous light bulb. Known as the Centennial Light, it is the world’s longest-lasting light bulb, still glowing in the Livermore, California Fire Department building.   The Shelby Electric Company manufactured the bulb in the late 1890s, and it was installed by the fire department in 1901. Since then it has only been turned off a handful of times, and you can watch a live streaming video of the bulb. 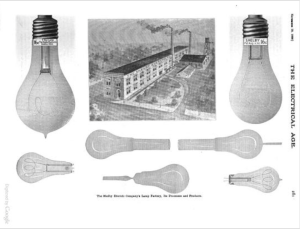 Although I have been unable to locate an example of the specific bulb type found in the Gunson collection, it does closely resemble several patents and other bulbs curated by museums.  As we move forward in cataloging the rest of the collection, perhaps more examples will be encountered.