How can we balance competing public health concerns for needing to make fruits and vegetables an accessible, affordable part of Americans’ lives, while protecting ourselves from some nasty little microbes? 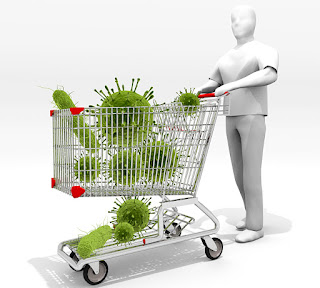 The dietary guidelines for Americans were recently released, with a message that we should eat more fruits and vegetables and less sugar. Meanwhile, John Oliver’s bit on food waste and #foodwaste have drawn my attention to a related quandary: millions of tons of healthy food go to waste in the U.S., while we struggle with the burdens of diet-related diseases.

While a lot of the media I see focuses on the cosmetic and superficial reasons food is thrown away, I find myself thinking about the legal issues. One of the first food law research topics I worked on concerned the Bill Emerson Good Samaritan Food Donation Act, which, as explained here, provides liability protections to companies that donate food to non-profits in good faith.

In this blog post I will describe how risks of microbial contamination intersect with food waste in the fresh produce sector.

The thing about fresh produce is that it’s fresh. It doesn’t go through a kill step to eliminate contamination. If contaminated produce is sold, it can lead to serious, potentially fatal illnesses. If it’s not sold, it may end up as millions of pounds of healthful food rotting in waste facilities when there’s no secondary processing market that the crop can be diverted to.

>Worse yet, when safe produce is linked to a foodborne illness outbreak, perfectly good produce may also be sent to landfills. But if an outbreak is occurring, there are important reasons to stop sales of all foods associated with the outbreak until the source can be accurately identified. So how should this be dealt with?

A case that was decided this past October, Dimare Fresh v. United States, No. 15-5006 (Fed. Cir. Oct. 28, 2015),  provides a great jumping-off point to examine the legal aspect of this public health challenge.

This case arose because in the summer of 2008, in the midst of an investigation into an outbreak of salmonella poisoning, the FDA issued a warning about a possible connection between the outbreak and tomatoes from Florida. The agency then issued a series of statements clarifying the suspected connection and ultimately removing the warning. The source of the outbreak was eventually traced to peppers, but the market demand for fresh tomatoes from Florida plummeted. There was no processing market available and the growers lost almost all of their remaining crop. The growers then brought a takings claim against the FDA, arguing that the agency’s action destroyed all economic value of their crop.

The case dealt with the question, “Should the FDA have to compensate growers for losses due to FDA’s erroneous warning?” The Court of Appeals for the Federal Circuit said no. But why not? And so what?

The claim is a regulatory takings claim under the Takings Clause of the Fifth Amendment, which prohibits the government from ‘taking’ private property for public use without just compensation. There are several categories of takings. The classic taking is when the government directly appropriates property for its use. The FDA did not seize the tomatoes at issue, so there was no issue of this being a classic taking.

Courts also recognize regulatory takings, where a government restriction on the use of property goes ‘too far’. Regulatory takings can be categorical, where the government compels an owner to suffer physical invasion of their property or prohibits all economically beneficial use. Or a regulatory taking can be reviewed ad hoc, where the court considers the economic impact of the regulation, a plaintiff’s investment backed expectations, and the character of the government action. Dimare Fresh, No. 15-5006  at 9-10 (citations omitted).

The tomato growers argued that issuance of the press releases constituted an exercise of FDA’s regulatory authority and constituted a regulatory taking. Though not a formal order, the warnings had the practical effect of stopping all sales, purchases and deliveries, and were authorized by a regulation.

Although the FDA acted according to its legal authority, that was not sufficient in the court’s eyes to produce a regulatory taking. The issue is whether there was an actual taking of the tomato growers’ property.

Unfortunately for the tomato growers, they were trying to create a takings claim out of a market response to a government action. Without “coercion, legal threat, regulatory restriction, or any binding obligation” the court refused to find a regulatory taking.  Dimare Fresh, No. 15-5006 at 16. In my interpretation of this, the court delineated a critical difference between a regulatory action that directly restricts or controls actors’ rights to their property and a regulatory action that merely provides information to other actors.

What’s particularly interesting to me about this case is the implications it potentially has for how public health officials and businesses interact to respond to foodborne illness outbreaks.

At the time of the outbreak, the Florida tomato industry had industry-wide requirements for food safety practices and a traceback system for finding the source of an outbreak. As I understand it, these were industry leading practices. What more could the growers have done to protect themselves? Why should they bear the cost of someone else’s error?

One way to protect themselves is to ensure that everyone is following certain minimum food safety practices. This would help protect the tomato growers from being connected to outbreaks associated with a completely different commodity, as happened here, by  increasing preventive measures to reduce the outbreaks overall. This was in part the motivation behind the produce standards required in the Food Safety Modernization Act.

But prevention doesn’t address how to allocate costs when an outbreak occurs. If people are getting sick, there is general agreement that there is a public health imperative to act. But when action is taken, who should bear the cost? The public at large, or the companies that produce the product? By imposing regulatory takings burdens on the FDA, the cost of their bad call could have been spread across the public through tax dollars. But it also could have had a chilling effect on the FDA’s willingness to issue alerts. That cost would come out of their operating budget, which is already inadequate for their responsibilities.

Finally, there’s the question of what to do with those tomatoes? The tomatoes growers alleged they had no ‘practical alternative to preserve their tomatoes’ when the market dropped. In the John Oliver bit on food waste a few months back, there was footage showing piles of fresh produce in the Salinas Valley being sent to landfills. My first reaction when I saw those piles was to assume they had some sort of microbial contamination. Rather than risk making their customers sick with potentially life- threatening illness, the companies chose to destroy entire fields.

It’s sad to see product that people put so much work (and water!) into producing is being wasted, while there is a major nutrition and obesity problem in our country linked to lack of access to these essential foods.

I know some of these crops are rejected for failure to meet cosmetic standards. The ugly food movement is about overcoming those issues. And for some crops there are systems in place to divert below standard produce to processing.

But why don’t we have the systems in place to divert more products into a processing facility where they would go through a kill step that makes them safe to eat? What could law and policy do to overcome the economic barriers and facilitate those secondary supply chains?

I do not know enough about fresh and processed produce supply chains to be able to answer these musings, but I would love to see some creative minds develop alternative processing supply chains for fresh produce that’s dinged for microbial contamination.

It looks like a potential win-win for the produce industry and public health advocates.

My name is Michaela Oldfield, and I am the Global Food Law research fellow with the Michigan State University Institute for Food Laws and Regulations and the Global Food Law Program. I have a J.D. from the University of Michigan and a Ph.D. from Michigan State in the Department of Community, Agriculture, Recreation and Resource Studies. My dissertation research was on the Food Safety Modernization Act, but my interests cover a range of regulatory issues from field to fork to waste. I like spending my time thinking about how to design, adopt and implement regulations that balance the diversity of interests affected by food and agriculture policy (without being captured too much by special interests) and are flexible and dynamic to the constantly changing world around us (but without being dysfunctionally unpredictable). Luckily, that is much of what I will be doing here! Being the Global Food Law Research Fellow means I get to interact with food professionals, lawyers, academics and government officials to identify, understand and help educate people on the numerous ways food law and policy is evolving and impacting globalized agri-food systems.