The Gunson/Admin assemblage continues to reveal gendered historical items linked to early females on campus. Most recently, Lisa Bright alerted me to the presence of a glass nail polish bottle stopper in the collection. 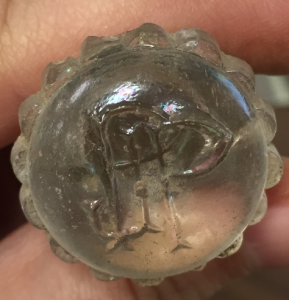 Luckily, the logo remains intact and, after some Googling, it was determined to be manufactured by the Dr. J. Parker Pray Company (established 1868). The New York City based company specialized in manicure and medicinal goods. Dr. Parker Pray began his career as a chiropodist, a hand and foot doctor, before transitioning into selling ladies’ cosmetic products.

In 1874, Dr. Parker Pray met Mary E. Cobb who had moved to New York City following the end of the Civil War. The two married that same year and Mary allegedly went to France shortly after to be trained in the techniques of manicure (1). Although Mary learned the traditional French manicure method, American women at the time did not greatly desire the French style. In 1878, she opened Mrs. Pray’s Manicure shop in New York City where she practiced a revised process of manicure that modern women are familiar with today (2). By all accounts, the shop and manufacturing businesses were wildly successful and the Prays are even credited with the invention of the emory board.

After the couple divorced in 1884, Mary returned to her maiden name and invested her energy into the expansion of her business through mail order and increased retail exposure (1). Mary even began to train women in the manicurist trade so that they could secure independent income. By 1900, Mary was in charge of one of the largest female-owned business operations in the world (as well as the largest manufacturer of pink and red nail polish) (1).

Boxes containing the polish were sold for 25 and 50 cents (3). While the bottle has not yet been found in the assemblage, just the discovery of the top is pretty cool! I was not able to secure dates (besides post-1868), but if the bottle is recovered we may be able to determine better manufacturing dates. If only Mary Cobb could have seen the variety of polish colors worn by women on campus today! 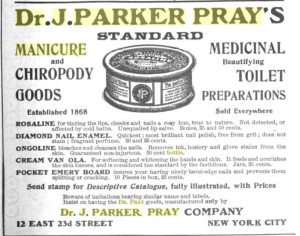