In the two-party governance system of the United States, graphs like these may seem confusing: 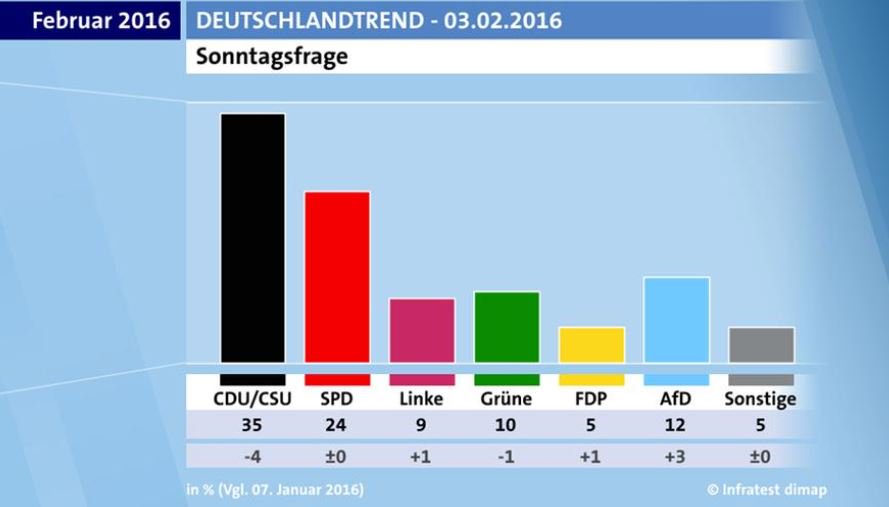 The state news channel ARD tweeted the results of an election poll yesterday with six viable parties, and another column in grey for all the rest. The Christian Democrats, Merkel’s party, lead with 35% of voters; followed by the moderate Social Democrats with 24%. Two left-wing parties, the Left and the Greens, have about 10% each. The neo-liberal Free Democratic Party is barely making the 5% threshold required to enter parliament. Then there’s the shocker: the far-right, nationalistic party called Alternative for Germany is pulling in a whopping 12%. According to the tweet under the image, it seems like AfD is mostly gaining voters who previously voted for the center-right Christian Democrats.

If you want to understand German politics right now, the AfD is probably the most prescient indicator of how the political mood in Germany is changing.

What’s also very important to understand is that this sea change has been gradual, and been in motion for much longer than the refugee crisis. AfD was founded in 2012 and first appeared in the 2013 federal elections, where they ran primarily on a platform of Euro-scepticism. The “Alternative” in their party name is understood as desiring a political alternative to the European Union and shared currency. They are doing well because Europe has started to teeter on the edge of political and economic collapse by being embroiled in two crises: one, the Greek economic crisis, and two, the refugee crisis. They are also doing well because they have managed, as a party, to oust all of their center-right founders. The far-right has taken control of the party.

Which brings me to the initial purpose of this post: the AfD has recently made some terrifying statements that can only be described as morally corrupt. Both the chairwoman of the party, Frauke Petry, and her representative, Beatrix von Storch, called for border guards to shoot refugees as a solution to the crisis in late January.  Von Storch was nothing less than clear in this FaceBook comments thread: 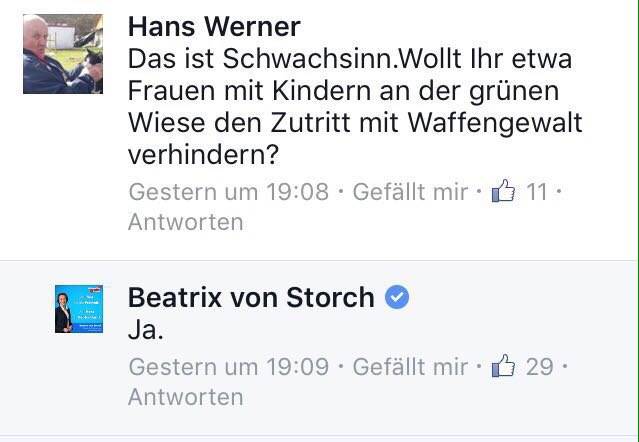 Hans Werner: That’s ridiculous. Are you going to limit access of women with children on the green meadows [border landscape] with armed force?

Katharina König: Shoot at children? Beatrix von Storch, #AfD says “Yes” Does anyone else have questions about this party? #coldcountry

There has been a massive amount of press attention to these statements, as there well should be. Petry and von Storch are trying to distance themselves from their PR disaster, with little success. And yet – for those voters AfD continues to poach from moderate right parties – these statements clearly have appeal. The AfD is becoming the party PEGIDA is legally prevented from becoming. On the rest of the political spectrum – including the centrist and left-wing parties – there must be some serious scrambling going on to find alternatives to the Alternativ.