As CAP fellows and volunteers continue to research and analyze materials excavated from the earth closet this past summer, we are slowly becoming more “privy to the past” (yes, I’ll wait for the laughter to subside). Thus far we have covered several individual objects from the privy, each item highlighting a new aspect of MSU’s past. The most recent object of interest is one of scandal and intrigue!! Okay, I’m exaggerating, but it does relate to mildly illicit behavior on campus. 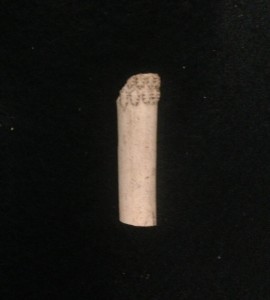 This object is a fragment of a clay pipe stem encircled by two rows of oak leaves in relief. Our cunning Campus Archaeologist, Lisa, determined that this was a decoration distinctive of “Peter Dorni” pipes. This type of clay (kaolin) pipe is a bit of a puzzle to historical archaeologists. They have distinctive stem decoration, which include the name Peter Dorni in block letter in relief on a rectangular panel, which is book-ended by four rows of deep, rouletted lines and two rows of oak leaves (Mayer 1994:10). The original manufacturer of this style is said to be a pipemaker in northern France, who was active from approximately 1850 to 1880, a possible “Peter Dornier” who shortened his name (Mayer 1994). However, nobody has been able to confirm the existence of Dorni/Dornier or the exact location of manufacture (Hinshelwood 1994).

Whatever the identity of this mysterious pipemaker, his pipes were popular enough that they were copied by manufacturers in Gouda, Holland, who took a break from cheese-making to export the copycat pipes to the United States. Others believe that pipes made in the Dorni style were also manufactured in Scotland and Germany (Mayer 1994:11), and no one seems to know how to tell the real Dorni pipes from the copies. No matter the origin of our leafy little pipe stem, it seems to fit well with the dates we believe the privy to have been in operation, from the 1850s to ca. 1876, when nearby Saints’ Rest burned down. 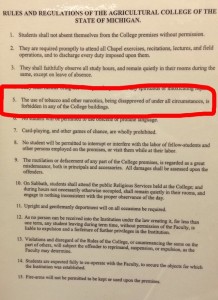 Another mystery, however, is raised by the mere presence of the pipe on the MSU campus at this time, because smoking was banned in the early days of the campus. The original rules for Saints’ Rest, the first dormitory, state that “the use of tobacco and other narcotics” is prohibited, a policy that lasted into the 20th century. A 1922 issue of the M.A.C. Record reported that the “restriction of the ‘NO SMOKING’ tradition on the campus so that it shall no longer apply to the athletic field was voted by the student body” (Vol. XXVII No. 2, March 17, 1922), attesting to the longevity of the ban.

The pipe is evidence that the smoking ban was occasionally (or often) ignored. Eighty-eight clay pipe fragments were found during the excavation of Saints’ Rest (Mustonen 2007), and there are photographs of students smoking pipes in the dorms during the time of the ban. Since smoking was against the rules, the owner of our Dorni pipe could not casually dispose of it, but had to throw it away in a location not likely to be seen by faculty members. The privy was the perfect place for the perpetrator (or poopetrator, should we say?) to get rid of any evidence of their rule-breaking. Archaeologists can attest that privies were frequently used to dispose of contraband, since only archaeologists are crazy enough to dig through all the… crap. 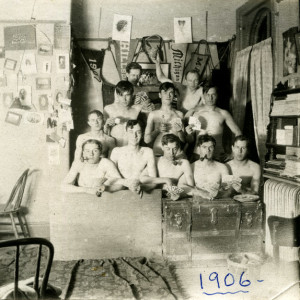 As a new smoking ban is set to take effect on the MSU campus in August 2016, it undoubtedly will not quell all smoking activity on campus. History has shown that students will always find ways to sneak around the rules, so you can put that in your pipe and smoke it! (But please don’t, it’s not good for you).