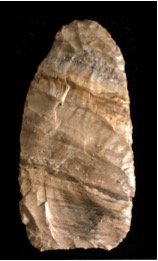 Our second CAP Cafe for the semester is right around the corner, February 25th. For those of you who haven’t been following, our new CAP Cafe series is designed to engage the general public with archaeologists and their research through informal events. At our previous CAP Cafe Dr. O’Gorman discussed her research at Morton Village in Illinois and then provided attendees with a tour of her research lab.  For our upcoming CAP Cafe, Dr. Lovis will be discussing evidence for Paleoindians in Michigan. His talk, titled “The Kennedy and Kalkaska Bifaces, the Plotner and Hipwater Locales: Perspectives on Michigan Paleoindians” will discuss the earliest inhabitants of Michigan.

As a preamble to Dr. Lovis’ presentation, I figured I’d give you a quick crash-course on the peopling of the Americas, Paleoindians and why they are so illusive in Michigan. Through genetic evidence (mtDNA) researchers have found that the founding population in the Americas originated in central Asia as early as 40k years ago. Genetic models indicate that colonization from Beringia occurred around 16.6k years ago. Melting of the ice sheets allowed the coastal corridor to open by 16k years ago, then the interior corridor became accessible by 14k years ago. Both of these routes were utilized by Paleoindians, though it is harder to prove the use of the coastal corridor because most of the sites are currently underwater.

Founding Paleoindian populations used least-cost pathways along riverine and coastal corridors and across homogenous landscapes and quickly populated vast areas of the Americas. Some models indicate that Paleoindians could have populated the continent in as little as 2000 years.

It was long assumed that the Paleoindian economy was focused around the hunting of big game. More recently, broader hunter-gatherer models of have been used to interpret the new data. Many agree that Paleoindians were highly mobile, using a combination of residential and logistical mobility to adapt to the changing environment, leading to a rapid colonization of the Americas.  Because Eastern North America would have been a fairly seasonally stable environment, leading to  species rich landscape which would have been more amenable to a generalized subsistence strategy; because of the lack of local plant knowledge, fauna would have been relied on heavily over flora.

As for Michigan, there is clear evidence that Paleoindians inhabited the area. Southern Michigan became ice-free as early as 14k years ago, and the most northern parts of Michigan were habitable by 11k years ago. Even with this long history, Paleoindian sites are few and far between in Michigan; this is due to many factors. First off, the transient and highly-mobile behavior of their hunting strategies resulted in ephemeral archaeological signatures; they didn’t leave much behind. The Paleoindian sites that have been discovered, generally consist of only a handful of projectile points. Additionally, low population densities during this time period makes it difficult to find sites archaeologically. Finally, like the case for the coastal migration, Paleoindian sites in Michigan are now underwater. Hypsithermal warming events occurring around 10k years ago, resulted in rising water levels and a flooding of the would be shoreline which would have been heavily utilized by Paleoindians hunting large game like caribou.

Hopefully, this crash course in Paleoindians provided slight intrigue that will encourage you to attend our next CAP Cafe and learn more about the Paleoindians of Michigan. Please join us, Thursday, February 25, 7pm in Mcdonel C103.

Pitblado, Bonnie L.
2011 A tale of two migrations: Reconciling recent biological and archaeological evidence for the Pleistocene peopling of the Americas. Journal of Archaeological Research 19: 327-375.

2006 Before Removal: An Archaeological Perspective on the Southern Lake Michigan Basin, In The Potawatomi Removal, Special Issue Guest Edited by Mark Schurr. Midcontinental Journal of Archaeology 31(1):21-56.

Kate Frederick is a graduate student studying anthropology at Michigan State University with a focus on Great Lakes Archaeology. She has a particular interest in hunter-gatherer food storage and its role in risk management, decision making, and nutrition. Additionally, her current experimental archaeology project is testing the efficiency of subterranean food storage pits by accurately recreating storage and processing techniques used by hunter-gatherers. Currently, She is the Campus Archaeologist for the MSU Campus Archaeology Program (http://campusarch.msu.edu/). This position allows her to work with multiple departments across the University to mitigate and protect the archaeological resources on MSU’s campus.