To say that the Gunson assemblage has a lot of glass is an understatement. So far, having fully cataloged one unit and being close to half way through another we have been encountering condiment jars, drinking glasses, medicine bottles, window glass, lab glass, and many fragments of canning jars. We even have a whole Mason jar from the bottom of unit A.

Today, canning jars have become synonymous with Mason jars (similar to how we call all tissues Kleenex or all bandages Band-Aids). Although canning has enjoyed resurgence in popularity in recent years, the jars have also become in high demand as drink vessels (i.e. hipster cocktail glasses), and as decorative items. Today the jars are mostly made of clear glass, but Ball has begun to reproduce the jars in blue, purple, and even green as part of their vintage “Heritage Collection”.

Although there were hundreds of patents for fruit jars, the best known and enduring is the Mason jar. In 1858 John Mason developed and patented a shoulder-seal jar with a zinc screw cap. In 1869 a top seal above the threads and under a glass lid was introduced, creating an excellent seal. As the original patents for Mason fruit jars was set to expire in the early 1870s, Louis Boyd and John Mason along with two others formed the Consolidated Fruit Jar Co. to renew patents and retain control of the Mason fruit jars. 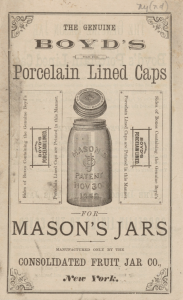 Archaeologists tend to like finding canning jars because they are relatively easy to date. Just like most ceramics, canning jars have makers marks, specific years that each company transitioned from hand blowing the glass to machine automation, and the signatures on Ball brand jars changed frequently. The blue color of many of the early canning jars also helps set them apart from other glass jars and bottles. We also find the porcelain liner that sealed the jars, and these also contain datable trade marks.

So why might we be finding fragments of canning jars in almost every level of the Gunson assemblage?

Well, there are several possible explanations. Although their main purpose was to preserve fruits and vegetables, these jars were used for a variety of purposes (just like today!).  You can see in this image of students working in the chemistry lab in 1897, mason jars with their zinc screw caps can be seen in the right hand foreground. 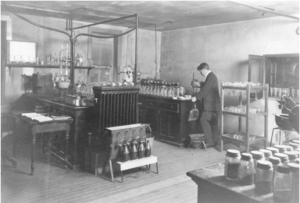 However, the canning and preservation of food was an important focus for the college in the early days. In fact, one of the earliest female masters theses, 1898, focused on canning. Amy Vaughn graduated with her bachelor of science in 1897 (she is the only woman listed in that graduating class). Miss Vaughn spent the next year working in the bacteriological laboratory investigating the causes of change in canned fruit. Her master’s thesis, “Domestic Canning of Fruit”, can be seen in the MSU Library Special Collections.

Canning continued to be taught as an integral part of the curriculum, with a special focus on domestic canning in the women’s courses. Canning would have also taken place in the faculty houses. There is even a tragic, if not humorous, story in the September 1897 M.A.C. Record about a professor living on faculty row that drops his wives tray of freshly canned fruit down the basement stairs, much to her dismay. (full story) 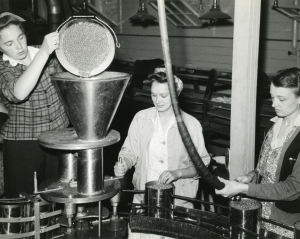 In the 1940s canning dramatically increased with the building of a campus-canning factory. In 1941 Henry Ford gifted canning factory equipment in order to build a wartime supply of canned foods for use in college dormitories. “From apples to spinach, products will be put into No. 10 size cans which hold nearly a gallon”. The project required the use of more than 240 acres of college land, where according to Professor R. E. Marshall none of the produce produced on campus will be sold. The canning equipment was installed in the short course barracks near the power plant, which can be seen labeled as the canning factory on maps from this time period (near the current Olds Hall).

MSU has a long history with canning and preserving. The abundance of canning jars we have found thus far in the Gunson assemblage is not surprising. Perhaps they were used by Mrs. Gunson to “put up” some of the ample fresh fruits and vegetables grown on campus; or perhaps Professor Gunson used them in his experimental greenhouse. Either way, canning jars go hand in hand with the agricultural history of MSU.