This is the first entry of a two part blog by Blair Zaid and Amy Michael about Myrtle (Craig) Mowbray, one of the first African American graduates of Michigan Agricultural College, and the climate and culture of college life in the first decade of 1900s. The first part below introduces Myrtle and some of her early experiences on campus as an African American woman. The second blog discusses her within the larger experiences of African American students across the country.

Myrtle Craig arrived at MAC in 1902 as a sub-freshman in the Woman’s Program. She would learn domestic sciences as a coed on campus. While Myrtle has the distinction of being the first African American woman to arrive on campus, her story is not unique. When viewed from a historical perspective Myrtle’s significance demonstrates broader change in the country. It highlights racial tensions and conversations that university students and administrators, as well as governmental bodies, were working out on a national scale at the turn of the twentieth century, and in some places, still to this day.

While it is difficult for modern students to envision restrictions put on students in the past, it is even more difficult to conceive of what campus life would have been like for Myrtle. For Myrtle Craig, like African American students who had the elite privilege of attending university at the dawn of the twentieth century, campus was one more place of segregation and discrimination. In 1896, the same year the Woman’s Program began at MAC, the Supreme Court ruled in Plessy v. Ferguson that racial segregation in public facilities across the US was legal. The “separate but equal” ruling also applied to college campuses. Myrtle would not have the right to eat with her classmates or sleep in the shared dorm, bathe in the bathhouse, attend social functions, and was most likely excluded from the privy we found last summer during CAP excavations. She was restricted from participating in campus life simply because she was a different race. Her ability to pay her way, scholastic aptitude, and gender did not protect her from the federal laws of racial segregation of the time. She was, by federal law, not allowed to participate in the college experience outside the confines of the classroom. 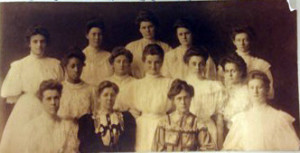 Myrtle arrived at MAC in 1902, at a time when there were very few women on campus. The university had only recently started to incorporate white women on campus through the formation the Women’s Program and the construction of Morrill Hall (a dedicated space for female students). In previous blogs I have addressed the physical restriction of women on campus; we know that all females were limited in their usage of the overall campus and chaperones were required for women to walk the campus grounds. Also, most of female students’ activities were restricted to Morrill Hall. Here, women ate together in the dining clubs, studied in the library, slept in their dorms and lived in unity. Nonetheless, as an African American woman, Myrtle would have been forbidden from these activities and spaces. 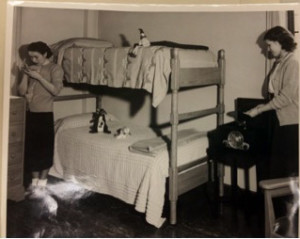 MAC however, had a different plan for Myrtle as well as the three other students of color on campus at the time. Historical documents from MSU Archives reveal that during her first two years as a student, she boarded with Addison Brown, a secretary for the college, and Professor Newman, an assistant professor of drawing and design in mechanical engineering. It is unclear why these two were chosen. Brown, a long serving secretary, was a part of the college during the formation of the Women’s Program. Newman, a founder of the city of East Lansing, also helped found the People’s Church which still stands today. These circumstances may have been why these two were selected to accommodate Myrtle on campus. Either way, MAC saw to it that she had manageable accommodations, despite federal laws to the contrary.

Within these conditions, Myrtle paid for her room, board, and tuition through cosmetology services and as a domestic. We can tentatively link Myrtle to CAP through artifacts given the potential roles she had on campus. While we do not have direct archaeological evidence for Myrtle’s experience, it is interesting to note that we have found examples of women’s cosmetics throughout campus. The making and preparing of food is read in the archaeological record through historical artifacts like butchered animal bone and old plates and dishware. While further research is needed to establish data linked to Myrtle, she was a part of the female body on campus and involved in these trades. We can use the historical archives information and the presence of these artifacts to conclude that she likely left some of these items behind as well. 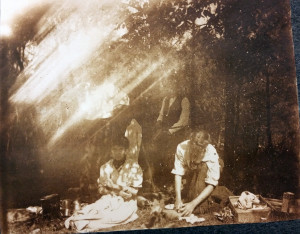 A century later, Myrtle’s imprint is more than an archaeological tale. This photograph was found in a student scrapbook and we are speculating that Myrtle is pictured at left.

There are a handful of other photographs of her, but they are all staged. This is a candid picture snapped during a class outing in 1907. If this is indeed Myrtle, she is pictured here as engaged with her friends, an active participant in college life regardless of the norm of segregation. With this potentially candid photo, and later enquiries from fellow graduates, we can infer friendships and bonds did develop as Myrtle traversed campus life to become an Aggie!

Myrtle’s story, shared by many other’s across the country at the time, reminds us of the strides and strife of developing an inclusive and diverse campus. When Myrtle returned to campus as an adult in the latter half of the century, she considered how MSU had developed with the installation of Clifford Wharton, the first African American president of a major public university. Follow Part 2 of our blog for a glimpse into some of the experiences Myrtle shared with her coeds and faculty and how these experiences reverberated throughout the country.