This is the second entry of a two-part blog by Blair Zaid and Amy Michael about Myrtle (Craig) Mowbray, one of the first African American graduates of State Agricultural College, now Michigan State University, and the climate and culture of college life in the first decade of 1900s. The first part here introduces Myrtle and some of her early experiences on campus as an African American woman. The second blog below discusses her within the larger experiences of African American students across the country. 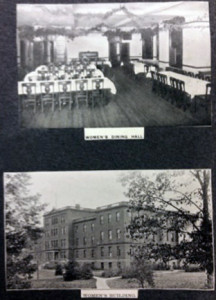 Myrtle Craig was the first Black woman to graduate from MSU (known as the State Agricultural College when she attended). Her experiences at the college can help us understand college life for African Americans across the country at the turn of the century. As we discussed in part one of this blog, campus life for African American students across the country was much more difficult than we can imagine. With federal laws barring integrated food and accommodation spaces, education at predominantly white institutions often resulted in extremely difficult learning environments for students of color. The changing country was facing technological and social changes that structured the rest of the 20th century. Within the first ten years of the twentieth century, the Ford Motor Company was built and the Wright brothers first took flight. Additionally, the National Association for the Advancement of Colored People was formed as a result of the Niagara Falls convention and President Theodore Roosevelt oversaw the organization of the FBI. The country was undergoing radical cultural and social change and so was MSU. 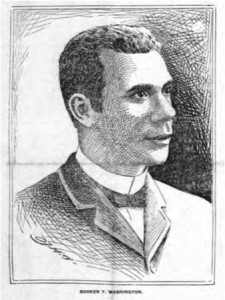 At the turn of the century, President Johnathon Snyder, along with other coeds from the college had witnessed two major shifts in American culture: a lessened focus on agriculture education and the end of Reconstruction. These two major events created a shift in technology and demographics throughout the country which required new approaches to social support and advancement in the US. The M.AC. Record chronicled student perspectives perspectives; archival evidence demonstrates that students were eager to understand how the college community could integrate itself with the changing social fabric of the country. “Our Colored Brother… Perhaps one of the most widely discussed problem,” wrote one alum as he championed the role higher education could play in assisting the transition between slavery and freedom (Westover, 1899 M.A.C Record Vol 5. 11).

President Snyder addressed these concerns by soliciting the council of Booker T. Washington, then president of the prestigious Tuskegee Institute established in 1881 in Tuskegee, Alabama. The Tuskegee Institute was one of several colleges and universities established by the Second Morrill Act that ensured education for African descendants barred from existing land grant institutions. Snyder and Washington probably became colleagues as a result of their shared interests in the scientific study of agricultural practices (pers. comm., MSU History Professor Pero Dagbovie). In 1899, President Snyder invited President Washington to give the MAC commencement address but it was delayed one year. In 1900, President Washington addressed the commencement crowd at the armory with a speech titled, “Solving the Negro Problem in the Black Belt of the South” (M.A.C. Record Vol. 5 No. 39). 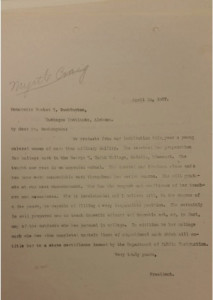 Upon graduation there were very few roles for women, particularly Black women with bachelor’s degrees. Archival documents from President Snyder suggest that Myrtle had two specific options: teach domestic science or domestic art. President Snyder’s personal recommendation letters for Myrtle, one to a generic audience and one to his long standing colleague, President Washington described Myrtle as “level headed,” further noting that she “has the confidence of her teachers and associates.”

These abilities would carry Myrtle far. Throughout the course of her life, she would take a path similar to many women who achieved the Bachelors degree in Home Economics. Myrtle chose to return to Missouri and taught at several colleges, high schools, and universities in the Kansas City, Missouri area. Eventually she married George Mowbray and became a sorority member of Delta Sigma Theta, a black woman’s social organization. Myrtle retired from Lincoln University, the black land grant institution of Missouri, as a faculty member in domestic sciences. The few details that we can gather from Myrtle’s time here at MSU and beyond help us to understand how race and gender shapes experiences and outcomes of higher education. During the era of Jim Crow segregation, Myrtle Craig’s story demonstrates the entanglement of these race and gender and the triumphs and struggles of a changing nation. 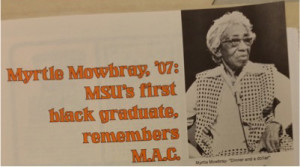