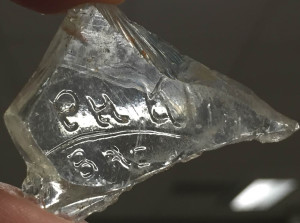 This past week, Lisa, the Campus Archaeologist, discovered fragment of two different beer bottles in the assemblage excavated from the remains of Professor Thomas Gunson’s household. The embossed words “PH Kling” appear on both fragments, although in different fonts, and an internet search quickly brought up references to the Philip Kling Brewing Company in Detroit. Fortunately for me, Peter Blum wrote a lovely book about the history of brewing in Detroit, in which the Kling company features prominently. I summarize that information here, but I would encourage those of you interested in the topic to give it a read (citation below). 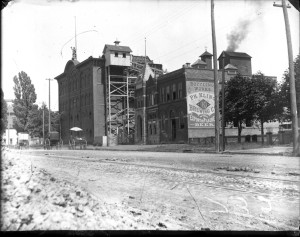 Brewing began in the city of Detroit around 1830, where the industry was run by mostly British entrepreneurs making ale. Beginning around 1848, a large influx of Germans into the area brought with it a new era of brewing in the Detroit—one dominated by German lager brewers. Among these German brewers was Philip Kling, a cooper, who along with Michael Martz and Henry Weber, invested in the Peninsular Brewing Company in 1856, which was located on Jefferson Avenue, near the future site of the Belle Isle bridge. Kling gradually took greater control of the company, which was renamed Philip Kling and Company in 1868. Kling became the first president of the Detroit Brewer’s Association and by the end of the 1870s, PH Kling was one of the city’s most successful and prominent breweries. Their offerings included Pilsener, Gold Seal Export, Extra Pale Ale, and Porter. 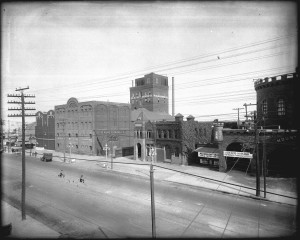 After reverting to the name Peninsular Brewing from 1879 to 1890, the name Philip Kling Brewing Company was formally adopted. This year also marked the beginning of the great brewing dynasties, which in Detroit included the Strohs, Klings, Martzes, and Darmstaetters. However, Kling was but a middling competitor amongst the giants. The brewery was severely damaged in a fire in 1893, and a new 6-story brewhouse with increased barrel storage was constructed. After Philip’s death in 1910, his son Kurt took over operations, but business was interrupted by Prohibition in Michigan, which began in 1917. Like other breweries, the company replaced the word “brewing” in their corporate name, becoming Kling Products Company. In the attempt to keep the company running and generate income, Kurt Kling built Luna Park next to the brewery, and amusement park that included a roller coaster. However, the company was forced to close in 1921 and the building was torn down.

Following the end of Prohibition in 1933, Kling purchased Daily Brewery in Flint and resumed brewing by 1936. However, former bootleggers in Detroit still controlled distribution in Detroit, and Kling found it difficult to make his way back into the Detroit market. While the other major breweries were quick to make post-Prohibition recoveries, Kling’s Flint venture floundered and was out of business by 1942. 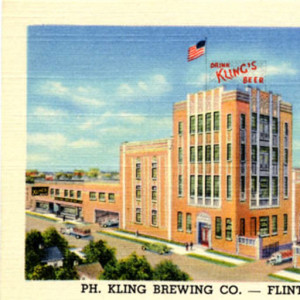 Back in East Lansing, we believe that the material from CAP excavations this summer is from Professor Gunson’s house, where he lived from 1891 until his death in 1940. A majority of the examples of Kling bottles online have the large, clear block lettering present on the second bottle fragment, while the first has serif lettering, for which I could find no online equivalent. It is possible that these bottles were from two different time periods, meaning Gunson could have been a long-term devotee of the brand throughout the span of its popularity. I could find no information concerning the distribution of Kling beer to other Michigan markets so it is unclear if Gunson purchased the beer locally or in Detroit. In any case, these small pieces of bottle glass tie MSU into the bigger picture of the Michigan brewing industry, which is a legacy in which the state prides itself today. I will hop into a more in-depth discussion of the social role of beer at MSU, in Michigan, and throughout world history in my next blog. In the meantime, relax and throw back a few cold ones—it will make the wait less brewtal.
Source: