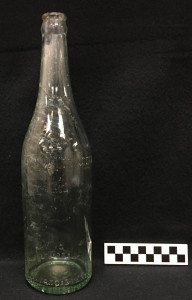 In light of the Venor’s sesquicentennial (150th anniversary), we here at CAP decided to highlight one of our finds from the People’s Park excavations in February of 2011. We found an intact Vernor’s bottle labeled as “Detroit’s Drink”. What is the connection to MSU and Detroit other than freeways you ask? Well keep reading and I’ll tell you.

We know that this slogan appeared on bottles with cork stoppers between 1918 and 1921 [1]. In 1921, the Vernor’s slogan changed to “Deliciously Different”. The apostrophe was dropped in 1959 [2] and the embossed Vernor’s Ginger Ale logo appeared on the very first bottles as early as 1896. The logo was put on the bottom because the bottles were shipped and cased upside down to keep the cork wet so the carbonation would not be lost. There was also a paper label that would have been under the embossing. According to the maker’s mark, our bottle was produced in Evansville, Indiana by the Graham Glass Company. Now comes a little Michigan history.

Close up of Vernor’s Ginger

Close up of Detroit’s Drink

Vernor’s has long been a Michigan staple and favorite to those of us that call the mitten home. It is also one the oldest ginger ales and the oldest soda/pop/soft drink in continuous production in the country, predating both Coca-Cola and Dr. Pepper [3]. It was invented by James Vernor, a Detroit pharmacist just prior to the Civil War. He was trying to develop a stomach tonic of vanilla, ginger and spices. As the urban legend goes, Mr. Vernor was called to fight in the Civil War in 1862 when he stored the new drink in oak casks until his return in 1866 [4]. The casks were cracked open and a new ginger ale born. The drink was first served in his soda fountain adjacent to his pharmacy until carbonation could be bottled in 1896. Mr. Vernor was very strict over the production of his drink, being known as a perfectionist and remained so until his passing on October 27, 1927 [5]. His family sold the company in 1966. 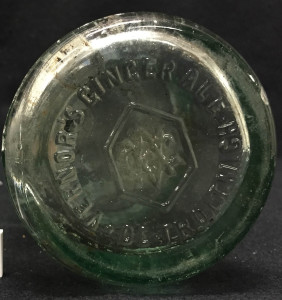 If you’re interested in learning some recipes for this famous beverage, check out the MSU Special Collections Library for their collection of little cookbooks here that have lots of recipes [6] and don’t forget to follow them on Twitter at @msulibraries. Some of the most famous recipes include the Boston Cooler (named for the street Vernor’s fountain shop was on, it consists of Vernor’s and vanilla ice cream), a Flint Town favorite when paired with an olive burger from Halo Burger and Aretha Franklin’s own favorite, Vernor’s glazed holiday ham [7]. Both of these recipes can be found in the little cookbooks mentioned above. 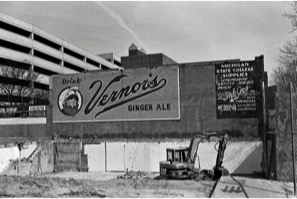 East Lansing, along with Flint were distribution centers of this Great Lakes ginger ale as evidenced by some little known advertising around town. In the summer of 2001, building demolition in downtown East Lansing revealed this Vernor’s advertisement along the side of the Curious Book Shop.  The MSC mural advertisement next to the Vernor’s one dates between 1925, (when our name changed from Michigan Agricultural College to Michigan State College) and 1955 (when we officially became Michigan State University)[8]. Note the custom Spartan Helmet Woody, the Vernor’s mascot gnome, is wearing! 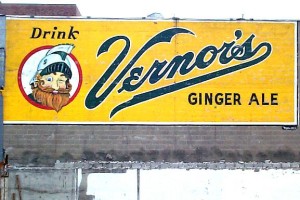 If you find yourself craving some of these concoctions and immersing yourself in a Michigan tradition check out the 150th birthday party that will be held in Detroit from June 5-11 where the city will be awash in green and gold. More information can be found here courtesy of Detroit Historical Society. If you’ve ever wanted to experience a ginger beer crawl, world record numbers of Vernor’s drinkers or restaurants featuring the aforementioned recipes, this is your chance. Nothing says Michigan like MSU and Vernor’s.

Nicole Raslichy is a PhD student whose dissertation examines the impacts of sacred landscapes on the ritual expression of identities in early hunter-gatherer groups in the Boreal Forest. Much of her fieldwork has been in working for indigenous communities to protect sacred landscapes through navigating archaeological policies and laws. This is her first year as a CAP Fellow and her project this year will examine deaccessional policies and practices in place at various museums. Through several museum research fellowships and assistantships an interest in museum policy and practices formed which will be highlighted in her CAP project. Follow her on Twitter @nicolle1977 and at her blog nicoleraslich.wordpress.com to keep up with her research and interests.