The undergraduate volunteers and I are slowly but surely cataloging our way through the Gunson Assemblage. So far we’ve finished Unit A, and are about 75% complete on Unit D. Over the past few months we’ve discussed many of the fun and interesting items we’ve discovered such as the PH Kling beer bottles, canning jars , Dr. Jay Parker Pray nail polish bottle stopper , and souvenir glass to name a few. During our time in the lab I’ve also noted a large amount of medicine bottles. 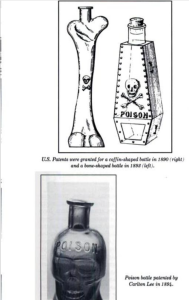 Medicinal bottles are some of the largest and most diverse group of bottles produced during the 19th and early 20th centuries. Just take a look at the wide variety presented in the SHA medicinal bottle guide . Today medicine containers are largely standardized, due in part to specific FDA packaging rules.   However, historically medicine bottles came in an amazing array of shapes and sizes [insert pictures of coffin bottle]. The large glass manufacturing companies, such as the Illinois Glass Company, produced these bottles as standard blanks that pharmaceutical stores/companies could apply paper label to. Bottles were also produced with the Druggists name and product information directly embossed on the bottle. There are several of these different types of bottles present in the Gunson collection. 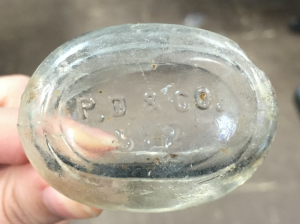 One clear glass oval bottle base fragment is embossed with “P. D. & CO. 592”.  This style of prescription bottle, known as the Philadelphia Oval, was most commonly produced between the mid 1870s and the early 1910’s. The makers mark, P.D. & Co., is from the Parke Davis & Company of Detroit Michigan. The company formally adopted that name in 1871, and they were once the world’s largest pharmaceutical company. They are also credited with building the first modern pharmaceutical lab that developed highly controlled methods for performing medical clinical trials. 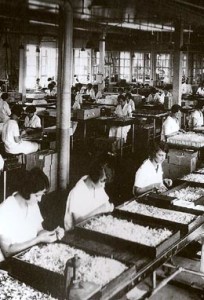 Parke-Davis moved its facilities to its location along the Detroit River in the 1870s, taking advantage of the ample and easy transportation provided by the Detroit River and nearby rail lines. They eventually built 26 buildings (that are still standing in that area!). The area as a whole is now known as the Stroh River place, and the entire area is recognized on the national register of historic places, but the main research laboratory is individually recognized as a national historic landmark. The main research building was constructed in 1902 after Parke-Davis relocated the Detroit Boat Club to Belle Isle. The company was purchased in 1970, but still exists within the larger Pfizer Corporation. The Parke-Davis company is connected with some of the most substantial pharmaceutical develops of the 20th century, including distributing the first cancer vaccine, first bacterial vaccine, the Salk polio vaccine, as well as the creation of PCP and other drugs. I can’t be sure exactly what was in our Parke-Davis bottle, even with the 592 stamp without having a more precise date for the bottle. Although the company numbered each of their products, over their history it appears that the numbers were sometimes changes or re-used. The 1894 product catalog lists 592 as Scillitoxin, a rare drug that was used as a cardiac sedative, but a 1918 catalog lists product 592 as only being available in Canada and Britain without listing what the specific product is (other than a fluid extract).

There is also an intact rectangular bottle embossed “Robinson’s Drug Store, 102 Washington Ave, Lansing Mich”. These rectangular druggist bottles were most common between the late 1870s and the 1920s.  I haven’t been able to locate much information about this store, but city directories indicate that it operated from at least the early 1900s until the 1920s, possibly longer. There is a payment note from the university to Robinson Drugs in the 1903 board meeting minutes, as well as an advertisement in the May 19th, 1908 M.A.C. Record. 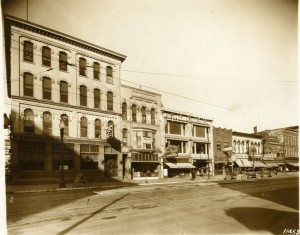 Another bottle base fragment, marked with an H inside a triangle, has been attributed to J.T. & A. Hamilton. This mark was used on medicine as well as milk bottles produced between 1900 and the mid 1930s. We have also identified many other homeopathic vials/bottles that are not attributable to a particular manufacturer/distributor. These small containers had the medicinal product dispensed in small amounts for the patient to consume or use.

Although it may be tempting to infer something about the health of the Gunson’s (although there is archival evidence that Annie Gunson, Professor Gunson’s first wife battled a long illness), the presence of this quantity of medicinal bottles is not surprising. To put it in perspective, imagine how many medicine bottles/boxes/containers are currently in your home right now! Because these containers were glass, there is also the possibility that they were reused for a longer period of time (but keep in mind that historically glass was considered a more disposal object than we tend to think of it today). Hopefully as we continue our way through the artifacts from the summer field school, we are able to better understand not only the Gunsons, but also early 20th century life at MSU.