Michigan Gov. Rick Snyder’s decision to pursue a right-to-work law in 2012 drew massive protests to the Michigan Capitol, moving state politics momentarily to the center of national attention. Each side predicted monumental changes stemming from the law, which went into effect in March 2013 and outlawed mandatory payments of union dues as an employment condition in new labor contracts. 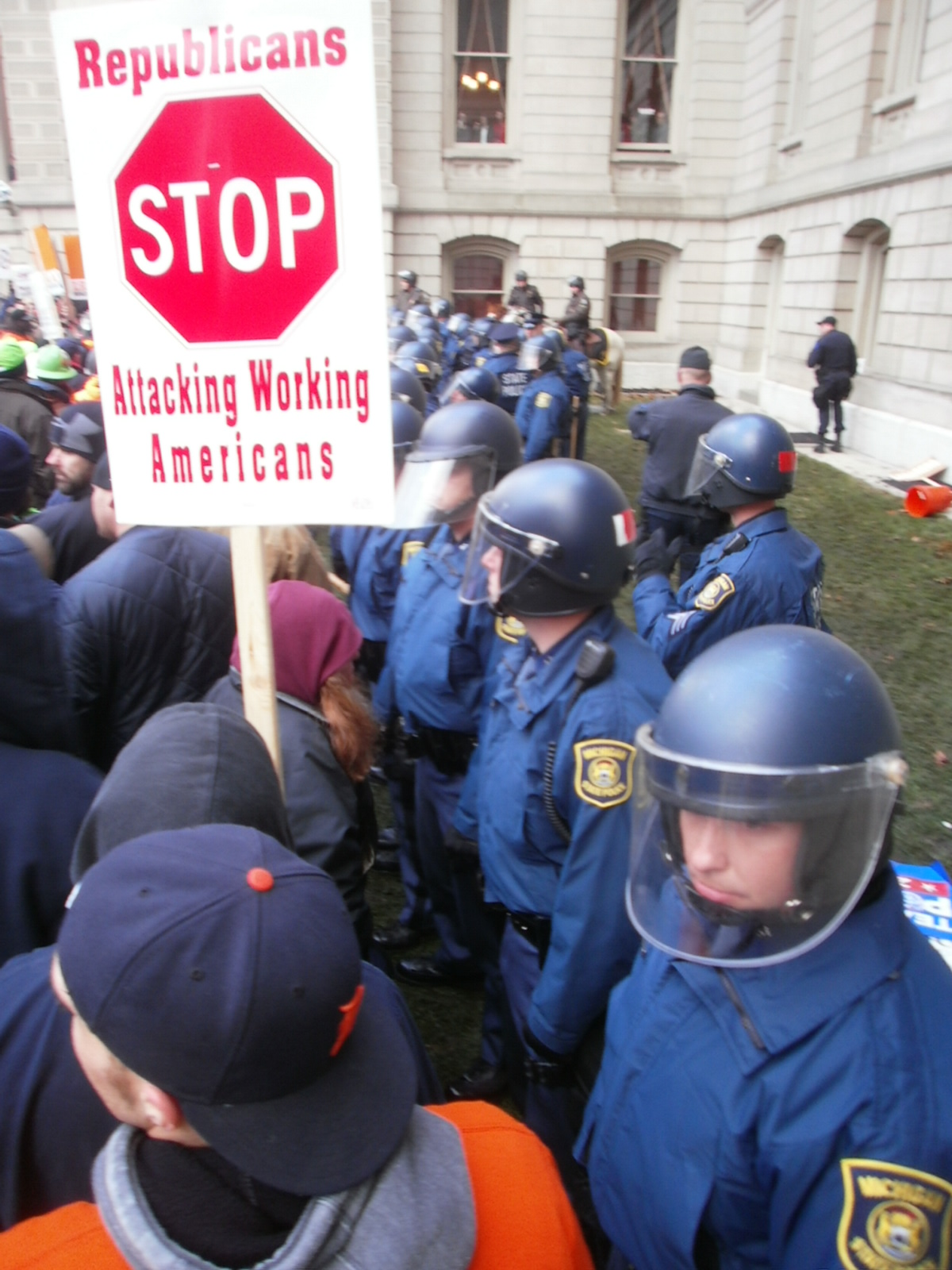 Snyder said the law would “contribute to our state’s economic comeback” with “more and better jobs coming to Michigan,” citing Indiana’s economic performance. Arlan Meekhof, R-West Olive, then Senate Majority Floor Leader, predicted “business moving to Michigan, new factories and new opportunities.” Then House Speaker Jase Bolger called it a “game changer.” On the other side of the issue, AFL-CIO President Karla Swift was equally confident of big changes, citing data showing that, in right-to-work states, workers “make an average of $1,500 less per year” and are “less likely to have pension or health care benefits.”

Much of the debate involved comparisons between states with and without right-to-work laws. But, of course, these two sets of states differ in myriad other ways, making the effects of right-to-work laws difficult to isolate. Simply comparing states with and without National Football League teams, after all, would yield plenty of important differences without implying that the Detroit Lions were responsible.

Proponents and opponents do agree on a mechanism for the proposed economic effects: declines in unionization. Both argue that union membership will decline as workers are given the option of avoiding union dues. The argument is about whether these assumed declines in unionization will create new business and jobs, as firms locate in Michigan, or will result in declining wages, as union negotiating power ebbs. Union membership is much lower in right-to-work states, though it could be a cause as well as an effect of policy differences.

The figure below charts union membership rates among all workers in Michigan and nationally, as tracked by the Bureau of Labor Statistics. There is some evidence (link is external) of a slight decline in Michigan in 2014, but there was no immediate effect in 2013. The long-term trajectory is downward, even though Michigan union membership actually rose in 2015. Michigan is moving down toward the national average over time, regardless of legal changes. It is too early to claim a major effect of right-to-work laws. Any effects should occur slowly as new contracts are written. 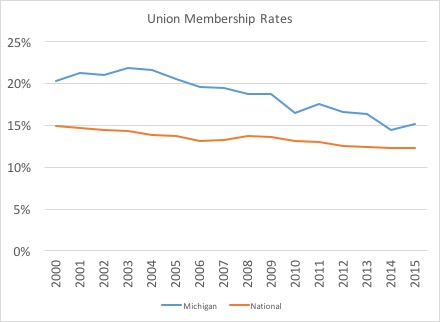 Even if right-to-work laws do produce declines in union membership, there is not strong evidence that the effects would be large enough to produce noticeable changes in business location decisions or wages. Whether to enact a right-to-work law was still an important policy decision, but assessing the impact of policy is difficult and often more nuanced than popular debates among politicians and advocates.

The episode should serve as a reminder that hearing both sides of a policy debate in news coverage, legislative debates, or hearings is not the same as gaining information on the likely effects of policy. Both sides have professional incentives to draw broad conclusions and make firm predictions, even when the evidence is inconclusive. As we debate new policies, it is useful to remember a third option in debates over whether new laws will help or hurt Michigan: they may have little effect either way.