If you follow us on Twitter, read this post about 3D printing, or if you came to the Apparitions and Archaeology tour last fall, you may have heard about Mable, the undisputed star of 2015 CAP excavations. During the excavation of the historic privy on campus last year, a fragmented doll’s head was recovered (creepy!). Luckily for CAP crew members, the excavation took place in broad daylight and no one has reported much psychological trauma…yet.

Made of china, or the material porcelain, the figurine sports a hairstyle known as a “flat-top”which became popular during the Civil War days. We can reasonably assume that the doll originated during this period and so Lisa Bright, Campus Archaeologist, named the doll Mable following a popular name of the 1860s. Mable does not have any maker’s marks aside from a hand-scripted numeral 7 on her inside bust. The holes in Mable’s bust would have articulated with a cloth body and at one time she would have had hands and feet made from the same china material as her head. 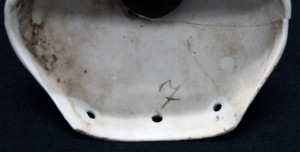 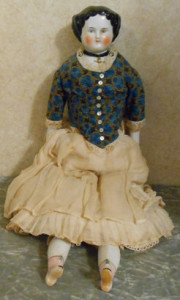 Complete doll from 1860s – Mable would have been similar. Image Source

The first porcelain flat-top or “highbrow” dolls were styled after women in the 1800s, so called after the flat-top hairstyle of the dolls (1). Because early dolls did not usually have maker’s marks or mold numbers, they can be dated and distinguished by their hairstyles (1) – doesn’t sound like a bad way to date when you consider 80s hair VS. today’s hair! Initial manufacturing occurred in Germany and France by doll-makers who crafted unique faces and styles, before the mass production of porcelain heads, hands, and feet in later years (2). We can assume that Mable has German roots as the country led the manufacture of these dolls between 1840-1940 (3). 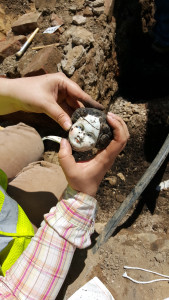 Due to Mable’s finely painted face, we suspect that she may have been a treasured item for her previous owner. China dolls like Mable enjoyed immense popularity with children for about 50 years (1840-1890) and were easily sourced (3). A rise in reproductions of the dolls occurred in the mid-1900s in the United States (3). I was not able to determine how much an original flat-top doll would have cost at the height of their popularity, but the figures now command upwards of $300 on the collector’s market.

We can, of course, only speculate about why Mable ended up discarded as trash. Perhaps her cloth body was damaged or she was no longer favored by her child owner. Maybe the child simply outgrew Mable. We welcome her here at CAP, resurrected from the privy and living on in our lab! 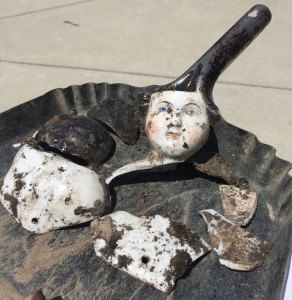 For more on dating hairstyles of dolls see: http://dollreference.com/china_head_dolls.html