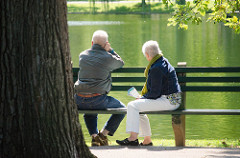 Couples and Ponds by jennie-o available under Public License

All caregiving is stressful. After all, you are directly impacting the life of a loved one, often in very personal and intimate ways.

About 44 million people worldwide have dementia. By the year 2050 it is expected to be 135 million.

Caring for a person with Alzheimer’s Disease or other dementia can be particularly difficult because of the progressive nature of the disease and the effect it has on the individual’s personality and ability to communicate. People with dementia are less able to do basic self care tasks than those with other illnesses, particularly in the later stages of the disease.  In addition, caregiving for Alzheimer’s Disease tends to last longer ranging from 4 to 20 years compared to an average of 4.6 years for all conditions.

Compared to other patients, people with dementia have on average more days of contact with the health care system, use hospital and skilled nursing facility services more often, have more inpatient days, and see more clinicians per year. People with dementia have an increased risk of adverse drug events because of the number of medications they take and are at greater risk of being prescribed an inappropriate medication.  In 2012, one in four people with dementia or multiple chronic illnesses were exposed to at least one high-risk medication.  Caregivers are usually responsible for managing these visits, making sure the bills are paid, and keeping track of medication as well as all the other aspects of care.

In the U.S., an estimated 15 million families provide care to people with dementia.  Dementia caregivers spend more time in caregiving, have more care responsibilities, and report more financial burden and emotional distress than caregivers of older adults without cognitive impairment.

According to the Alzheimer’s Association, only 6% of caregivers for a person with Alzheimer’s are spouses. Most are children. This makes sense. Women live longer and are, therefore, more likely to develop Alzheimer’s or other dementia and are also more likely to be widowed leaving a child (usually a daughter) as her primary caregiver.  Or if the spouse is still alive, they are likely to need care themselves.

While many of the caregiving issues are the same, caring for a spouse versus a parent carries unique challenges because of the nature of the relationship.  One recent paper by researchers at Lancaster University in England discusses the results from ten qualitative studies published between 2004 and 2013 that examined the impact of dementia on couples’ relationships.

They identify several themes across these studies.

Couples worked to keep a shared identity as a couple. Dementia was something external to the couple even though one person had the illness.

Coping involved teamwork and an ability to adjust to shifting roles and responsibilities as the dementia progressed. Some couples planned the transition while for others it was a more organic process.  Shifting roles led to different power dynamics which also influenced each partner’s  identity. Some spouses embraced the new responsibilities, others felt them only as a burden.

Couples were resilient and demonstrated that in a number of ways. For some this meant continuing with their usual activities no matter what. Others reevaluated their life together and developed strategies and adjustments to make the most of their remaining time together.

It seems so obvious to say that when one spouse is diagnosed with dementia the couple is affected.  Our current approaches to treatment and research, however, don’t always incorporate the couple as a unit. This paper highlights some of the reasons that is so important.

More on caregiving and dementia in upcoming posts.

In the meantime, have you or someone you know cared for a spouse with dementia? Do these themes resonate with that experience?