Since 1995, Michigan State University’s State of the State Survey has tracked the views of Michigan residents on a wide array of topics.  This Survey is a part of MSU’s Institute for Public Policy and Social Research.  In the 69th round of the State of the State Survey, conducted in 2014, Michigan residents were asked about the relative sizes of minority populations.  The results indicate that Michigan’s people tend to overstate these populations.  In some cases, the overstatement is dramatic. 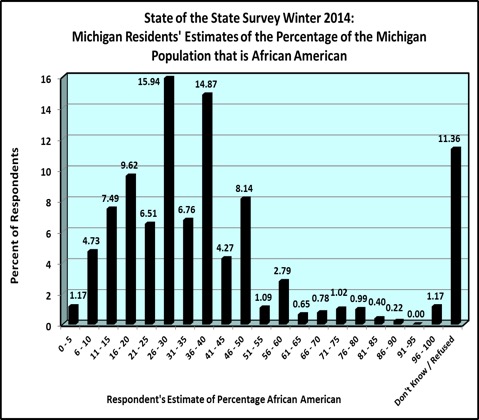 Data from the U.S. Census show that African Americans represent around 14% of Michigan’s population. However, as we can see from the graph below, most Michigan residents believe the black population to be much larger than that.

One possible explanation for these big overstatements is that some residents may give too much weight to the City of Detroit when making their estimates.  In fact, Detroit’s population is around 82% black. However, Detroit’s population has been shrinking for 60 years, and only about 7% of Michigan’s current residents are Detroiters. 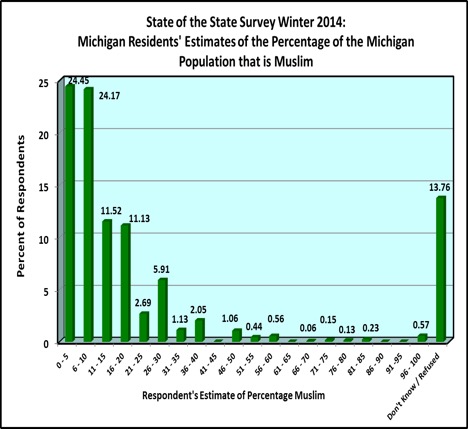 Michigan residents did not do much better when assessing the Muslim population.  In fact, Muslims are a little under 2% of Michigan’s population, but about 80% of the survey respondents gave a higher estimate. 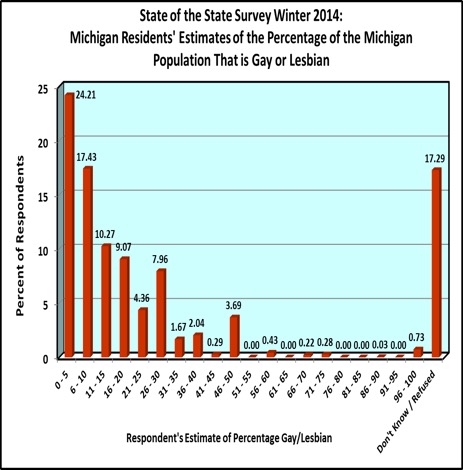 Finally, Michigan residents are just as bad at assessing the size of Michigan’s gay and lesbian population.  By one estimate, about 4% of the population is gay or lesbian, but more than 70% of the survey respondents gave a higher estimate.

About one of every six respondents believes that Michigan’s population is more than one-quarter gay or lesbian, and a few even believe that Michigan has a gay majority.

When Michigan’s residents overstate the extent of minority populations, they are not unusual.  These results for Michigan are consistent with results from a number of studies all across the country.

Charles Ballard has been on the Economics faculty at Michigan State University since 1983, when he received his Ph.D. from Stanford University. In 2007, he became Director of the State of the State Survey, in MSU’s Institute for Public Policy and Social Research. Also in 2007, he won the Outstanding Teacher Award in MSU’s College of Social Science. In 2011, he joined the Board of Directors of the Michigan League for Public Policy. He has served as a consultant with the U.S. Departments of Agriculture, Health & Human Services, and Treasury, and with research institutes in Australia, Denmark, and Finland. His books include Michigan at the Millennium and Michigan’s Economic Future.