In my previous blog, I discussed the history of the Philip Kling Brewing Company of Detroit, inspired by fragments of two Kling beer bottles found in the Gunson house debris last summer. While the story of the Detroit brewing industry was interesting, it was all history and no anthropology. And that makes Susan a dull girl. So this time I will explore how beer can be examined archaeologically and used to look at social relationships between people in the past.

Humans have been brewing beer for thousands of years. Some have proposed that beer-making was the primary motivator for the transition to sedentary, agricultural life ca. 10,000 B.C., although hard evidence of its existence is more recent. Beer is mentioned in some of the earliest writings from ancient Babylon (ca. 4000 B.C.) and earliest archaeological evidence comes from a pottery vessel from the site of Godin Tepe in Iran, which dates to approximately 3400 B.C. But how do archaeologists detect ancient beer, you ask? SCIENCE!! Patrick McGovern, the so-called “beer archaeologist,” is a biomolecular archaeologist at the University of Pennsylvania Museum of Archaeology and Anthropology, and he has made a career out of identifying the chemical traces of fermented beverages in ancient ceramic vessels. He looks for certain “fingerprint compounds,” such as calcium oxalate for barley beer and tartaric acid for wine, which can be identified through elemental analysis. McGovern has used his identifications to trace the history of brewing practices and trade across the Old World. 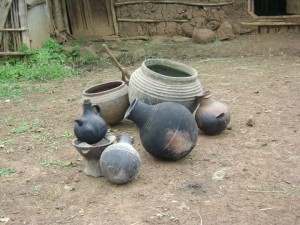 Gamo pottery from a farmer’s household in southwestern Ethiopia

John Arthur, an archaeologist at the University of South Florida – St. Petersburg, observed that ceramic vessels involved in the fermentation of beer in present-day southwestern Ethiopia showed signs of interior attrition. This means that the fermentation process eats away at the interior surface of the vessel, leaving a distinctive pattern that can then be identified in pottery excavated from archaeological sites. Arthur then uses this information to make social inferences about the past. Among the Gamo of Ethiopia, which is a caste society, only the wealthier households from the high caste can afford enough grain to make beer (farso). Thus pottery with interior attrition could provide insight into socioeconomic differences in certain ancient societies.

This brings us to the issue of access and social meaning. Not everyone has access to either the resources to make beer or to the finished product itself. Chicha, or maize beer, was consumed primarily in the Andes region of South America as long ago as 3000 B.C. Not only was it a sacred drink, but it was available only to elites. In Medieval Europe, however, beer and ale were produced in the home and provided nutrition for the everyday laborer, while wine was reserved for the upper classes. Prior to AD 1000, women in Europe baked bread and brewed beer for their families. After this time, the formation of Brewer’s Guilds moved the preparation of beer from the homestead to licensed brewhouses and under the control of men. By 1700, most beer-making was conducted by large European breweries. In the North American British colonies, ale was considered a “civilized drink” and breweries were built on the grounds of prominent plantations and estates to sate the thirst of their esteemed owners. 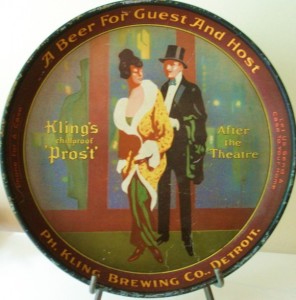 The Industrial Revolution allowed for an increase of commercially available beers for public consumption and led to the rise of major beer producers, such as Phillip Kling Brewing in Detroit. I was unable to find information on the public’s view of Kling beer, such as whether it was considered a cheap, “everyman’s” beer or a higher class brew. They certainly seemed to have marketed themselves as the latter, as shown by rare decorative trays that depicts a dolled-up couple “after the theatre” and proclaims to be “A Beer for Guest and Host.”

Throughout much of the 20th century, however, the bland, mass-produced beer, marketed by clever commercials and large horses, made beer the signature blue collar and frat boy beverage, but in the last few decades or so, the rise of microbrews and hipsters have increased the interest and status of beer, which now comes in a broad range of varieties, full of flavor. It has also renewed interest in resurrecting the flavors of ancient brews, which were once complex recipes involving herbs and multiple sources of sugar, as opposed to the simple recipe of your average Bud Light. McGovern’s research has helped Dogfish Head Brewery in Delaware create a line of Ancient Ales, the most famous of which is Midas Touch. The Field Museum in Chicago also recently announced they will release a recreation of a maize-and-berry beer made by the ancient Wari people of Peru. 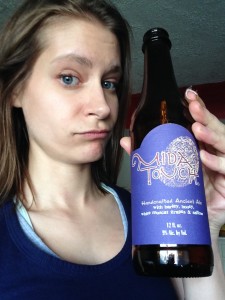 Being a thorough researcher and trying out Dogfish Head’s Midas Touch, a recreated ancient ale. You know, for science.

It comes as little surprise to find that people are using a beverage so beloved in modern American culture to connect with peoples of the past. Professor Gunson and his bottles of PH Kling beer comprise but a small piece of the story of the long love affair of humans with beer. This love affair continues at MSU today, evidenced by the beer cans strewn across the campus after a home football game and by the popularity of taprooms like Hopcat. Beer brings us together, but it can also divide us; beer anchors us to the present, and it connects us to our past.

McGovern, Patrick E.
2009   Uncorking the Past: The Quest for Wine, Beer, and Other Alcoholic Beverages. University of California Press, Berkeley and Los Angeles, CA.