My old friend Mark Alford (WUSTL) was on campus last week for the inaugural meeting of the FRIB-TA (Facility for Rare Ion Beams Theory Alliance). Over beers he told me he had come up with a pedagogical way to explain Bell’s inequality in a single picture. Here it is.

Ghostly action at a distance: a non-technical explanation of the Bell inequality

We give a simple non-mathematical explanation of Bell’s inequality. Using the inequality, we show how the results of Einstein-Podolsky-Rosen (EPR) experiments violate the principle of strong locality, also known as local causality. This indicates, given some reasonable-sounding assumptions, that some sort of faster-than-light influence is present in nature. We discuss the implications, emphasizing the relationship between EPR and the Principle of Relativity, the distinction between causal influences and signals, and the tension between EPR and determinism. 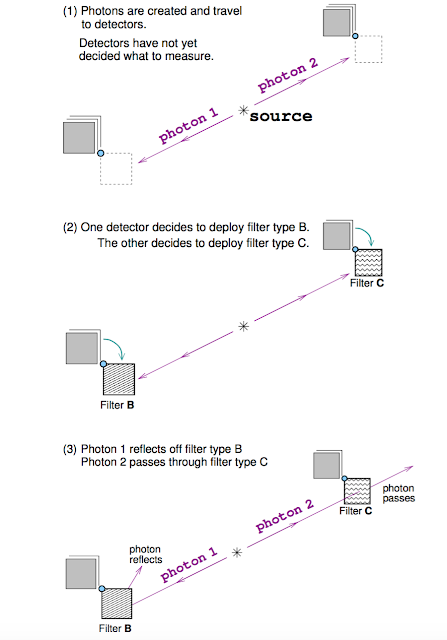 FIG. 4: One trial in the EPRB measurement of polarization for two photons. The final result in this trial is that photon 1 encountered a filter of type B and reflected off it, while photon 2 encountered a filter of type C and passed through it. According to the Bell inequality (Eq. (3)) this sort of result, where the two photons do different things when encountering different filters, should happen no more than 2/3 of the time.

… When polarizations of pairs of spin-singlet photons are measured in real-world experiments, it is found that they do show agreement in same-axis measurements, but when we perform different-axis measurements the two photons only show the same behavior 1/4 of the time; 3/4 of the time they show different behavior: one bounces off its filter and the other passes through. This violates the Bell inequality. Such violation has now been seen in many experiments …