Time for a leap, that was the message last night from Naomi Klein as she spoke at Michigan State University. 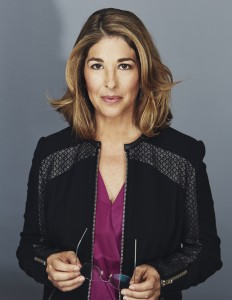 In addressing both the seeming conflicting euphoria and dismay that followed the recent Paris Climate Agreement she summarized it as: on the Euphoria side that the world had agreed to a plan to keep climate change below 2 degrees Celsius, while aiming for 1.5 degrees, the figure that many scientists believe we could still adjust to. On the Dismay side of the equation is the simple fact that if you added up all the VOLUNTARY pledges of the nations at Paris to reduce their emissions, we won’t make the 2.0 degree target, but rather will likely see a 4.0 degree rise. One might see this is an improvement over the 6.0 degree rise we could expect if we just keep on ‘business as usual.’

In last week’s The Nation, Bill McKibben wrote about  Global Warming’s Terrifying New Chemistry where recent research from Harvard published in February found that the U.S.

“is  leaking methane in massive quantities. Between 2002 and 2014, the data showed that US emissions increased by more than 30 percent, accounting for 30 to 60 percent of an enormous spike in methane in the entire planet’s atmosphere.”

McKibben also points out that recent research now suggests that EPA’s old assumption that methane had 28 to 36 times more heating value than carbon dioxide looks woefully low, with the figure now looking between 86 to 105 times the potency over the next decade or two. Oh shit!!

In another recent review of the Paris Climate Agreement “Paris: Optimism, Pessimism, and Realism” from a British think tank they paint a dark picture and argue adding more emphasis on developing adaptations in a globally just way to survive the oncoming destabilized climate.

Driving home after the event last night and listening to the NPR show, On Point,  scientists were remarking on the newly released estimates for global sea rise – instead of 3 feet by 2100, we’re now looking at 6 feet!!

After showing the trailer from the movie based on her  most recent book: This Changes Everything: Climate vs. Capitalism  Klein gave a brief flowing summary of  how she came to research and write it. The book shows how our current economic system is driving us towards the abyss. She interwove stories from places she visited around the world from the Hurricane Katrina disaster in New Orleans, to the Tar Sands of Alberta, to the halls in Paris where activists from around globe came on the heals of the Paris terrorist attack to push governments to commit to reducing greenhouse gas emissions. But while she certainly didn’t paint a rosy picture of our prospects, she is clearly moved by the global movement of people everywhere to make change. She concluded with a glimmer of hope she found most recently in efforts in her own home in Toronto.

Activists came together from across different segments of the community to raise and discuss a multitude of concerns. Over two days of difficult discussions emerged a consensus around some common ground. What emerged is the LEAP Manifesto. The name comes from both the fact that they were meeting in a leap year, and that what was required to steer clear of the abyss would require great leaps forward, not baby steps. And they must be made together. The need for face to face discussions to surface the fears and develop the alternatives. 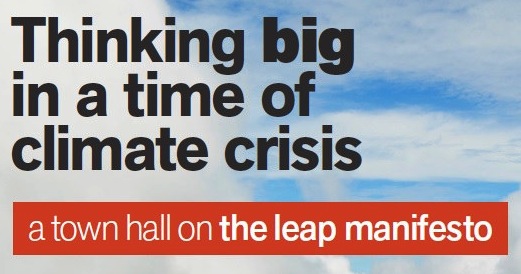 The LEAP Manifesto calls “for town hall meetings across the country where residents can gather to democratically define what a genuine leap to the next economy means in their communities.”
The evidence is piling up that we’ll need to make some big leaps soon.  I’m hoping people will grab a copy of Christian Felber’s Change Everything: Creating an Economy for the Common Good. I gave my copy to Naomi Klein after dinner last night.