With the semester almost over that can mean only one thing for CAP, the impending start of summer campus construction. Although there isn’t anything scheduled as large and complex as the steam tunnel renovation project that has engulfed north campus past few years, there is some work going on in important areas of north campus. The project I’m focusing on right now involves sidewalk, landscaping, and parking changes to the Abbot Road entrance.

The Abbot Road entrance as it exists today is a very familiar part of campus to most students. It’s where the Union is, as well as many of the dorms. However, things looked very different there, not all that long ago. This area contained many historically significant buildings and objects including the Weather Bureau, Y.M.C.A., Faculty Row House #6 and #7, Station Terrace, the streetcar turnout point and streetcar waiting room. Recently, I’ve been conducting research on the streetcar to try and pinpoint the area for the waiting room, and the exact spot it made it’s entrance and turn around. 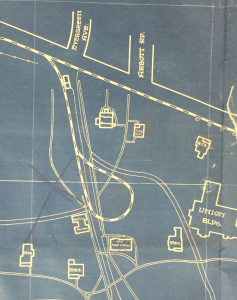 Travel to the college in the early years was difficult. The plank road from Lansing to campus was not pleasant to travel. Many students hired private wagons to transport them. To let the wagon driver know a pick up was needed, you had to climb to the tower on top of Williams Hall and raise a flag. Calling an Uber is much easier these days! 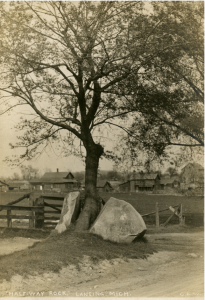 Once the electric streetcar line was established in Lansing, the line along Michigan Avenue only went as far at the Half-way Rock. A quick tangent in case you don’t know about this special rock. The Half-way Rock, also known as the split rock was a large bolder almost exactly at the midway point between the Capitol and the campus gate. It served as a popular rest station. At some point, a cherry tree began to grow out of the center of the rock, splitting it in half. In 1924 the rock was removed due to the widening of Michigan Avenue. Half of the rock was placed in the southwest corner of the Union where a cherry tree, much like the tree that split the rock in half, was planted next to it. Stop by sometime and read the poem written on the dedication plaque.

By 1894 the streetcar line was extended to reach the Beal entrance of the University. There was significant push back from some officials at the college regarding extending the streetcar line further. They feared that this would attract the “undesirable element” from Lansing, and give students easy access to downtown Lansing bars. However, the increase in female enrollment post 1896 swayed many regarding the need for better, safer transportation and the streetcar line was extended onto campus. The streetcar line at the time is noted as being rather unreliable. Articles in the M.A.C. record note that the cars did not run on time, and the electrical cabling that powered the cars was ill equipped, causing the cars to certainly lose power at one point or another during the journey. In fact, the February 28th 1905 issue of the M.A.C. record contains a song written by the students about the streetcar problems. 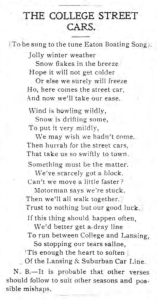 The line entered campus across from the Michigan Avenue and Evergreen intersection, and crossed over onto what today is Abbott Road. This is where the small waiting room was originally placed. In 1902 the waiting room was demolished, and moved into the Station Terrace building. Station Terrace originally housed researchers from the M.A.C. experiment station, and later housed bachelor instructors, earning it the nick name the Bull Pen. From 1903-1923 this building also housed the East Lansing post office. In 1924 the building was actually moved off campus, to 291 Durand Street, so it will be interesting to see what may remain of the structure. 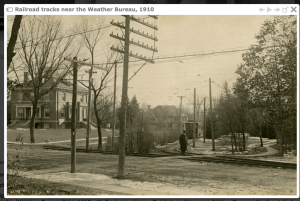 The campus portion of the streetcar line was removed in the mid 1920s. You can see on this 1927 map that Abbot Road is beginning to look much like it does today. Streetcar service continued in East Lansing until 1933 when the tracks were torn up and paved over. We’re planning on conducting some preliminary shovel test pits next week in the area of Station Terrace and the streetcar turn around. It will be interesting to see what remains! James DeLoss Towar. History of the City of East Lansing. 1933