I am from Wisconsin. Not only was I born and raised there, but I am also a Wisconsin stereotype—I grew up on a dairy farm. After 25 years in the Dairy State, I relocated to Illinois, but I never felt at home on the flat plains. I moved to Michigan a few years later and although the Great Lakes State has its own unique cultural flavor, there is a sense of familiarity here among the lakes and woods.

However, a sense of excitement still moves through me whenever I find a connection to my home state here in Michigan. The discovery that yet another treasure from the privy excavated by CAP last summer also originated in Wisconsin filled me with curiosity. The artifact in question is a bottle embossed with the words “Flavoring Extract” on the front panel and “Tallman and Collins” on the side. 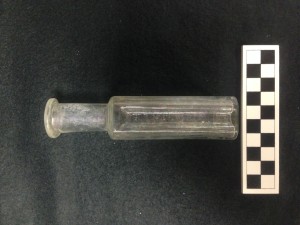 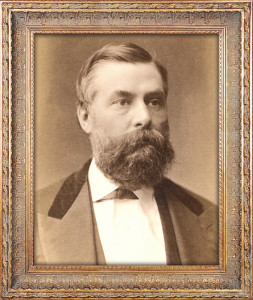 Tallman and Collins Manufacturing was a company in Janesville, WI. The company’s founder, William Henry Tallman, was the son of William Morrison Tallman, a renowned lawyer and abolitionists, whose grand house (now a museum in Janesville) hosted a short stay from Abraham Lincoln in 1859. William Henry did not follow in his father’s political footsteps, instead purchasing a stake in a local drugstore business. By 1857, Tallman was running the company and took on Henry W. Collins as his new partner. Initially, Tallman and Collins was an import and wholesale business, selling medicine, drugs, chemicals, perfumery, and liquors. By 1864, Tallman expanded the business to include manufacturing a new line of perfumes and extracts. However, by 1869, Tallman and Collins ended their business partnership and Tallman continued on, focusing solely on perfume manufacture. Tallman perfumes and colognes were incredibly popular in the 1870s, but the company closed in 1883 due to William’s poor health. 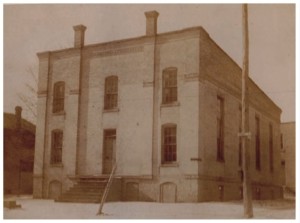 While it may seem odd that a company known for its perfumes also manufactured flavoring extracts, it was, in fact, a common pairing. The rise of organic chemistry in the mid-nineteenth century led to a flourishing field of crafting new fragrances, and given the close relationship between smell and taste, also led to the discovery of synthetic flavors. Various fruit-flavored candies, full of delicious synthetic flavor, were one of the attractions of the 1851 Crystal Palace exhibition in London, which was a celebration of the world’s technological advancements. 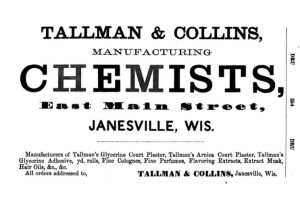 Advertisement in the Wisconsin and Minnesota Gazetteer, Shipper’s Guide and Business Directory for 1865-’66

In the aftermath of the Industrial Revolution and increasingly mass-produced food, there was a need to make otherwise bland processed foods a bit more palatable. Spices and natural flavoring extracts, a major component of worldwide trade, were expensive, so chemically synthesized flavors became a cheaper alternative for giving food some extra delicious flavor. Tallman and Collin’s company jumped on the flavoring market a mere thirteen years after its world debut, demonstrating Tallman’s business acumen. Although better know for his perfumery, the presence of its extracts in Michigan suggest their demand was great enough to warrant distribution to other parts of the Midwest. 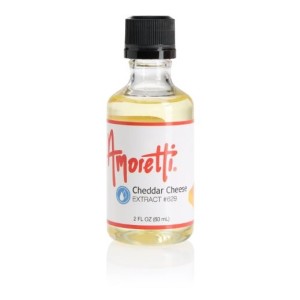 The flavor contained within our privy bottle remains a mystery (a chemical analysis of the contents are perhaps a bit out of the scope of CAP’s resources). The likeliest candidate is the one of the earliest and most common artificial flavors, vanilla (synthesized through the chemical vanillin), used to make early MSU campus food just a smidge less bland. However, in my vivid imagination, it contained cheese extract, obtained by another Wisconsinite desperate for the flavor of home while away at school. Fanciful interpretations aside, this small bottle provides us the opportunity to explore the history of chemistry, product distribution, and food trends and preferences of the recent past, a delicious addition to our knowledge, indeed.