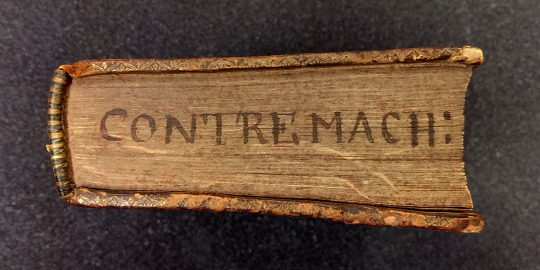 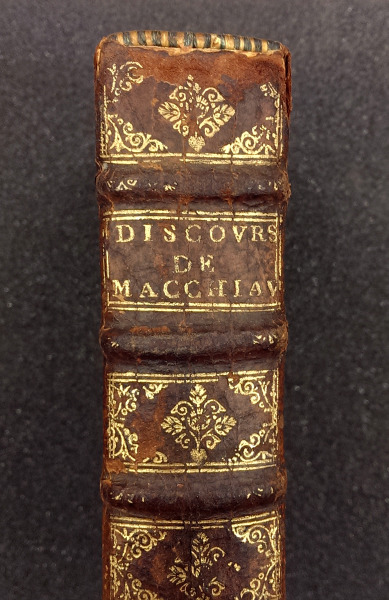 In preparing for the purchase of another title by the Italian Renaissance philosopher, Niccolo Machiavelli, I found this sixteenth century rebuttal of the principles of Machiavelli by the French jurist Gentillet.

In his book, Discours sur les moyens de bien gouverner, Gentillet analyzes the character of a ruler, rights of parliament, and capacity of councilors among other traits of good statecraft. It is landmark book and quite uncommon, but what struck my eye immediately was the term “CONTREMACH:” boldly written on the top of the text block. At first glance I thought an owner of the book used the term for shelving purposes, but why write such an aid on the top of the text block where it is not readily seen? And more importantly, what does “contremach” mean?

After showing this to Andrew Lundeen, founder of the MSU Provenance Project, he quickly determined that the term “contremach” is really an abbreviated reference to the title (or shorthand name) of the work and was likely used for shelving purposes. That is to say, CONTREMACH: or CONTRE MACH: stands for “Contre [Against] Mach[iavelli].”

Andrew’s note: This fascinating little volume illustrates a couple of interesting facts about working with old books. Firstly, we should never assume that a work only went by one title, or even that the full printed title of a book was the preferred nomenclature. Formal titles were often absurdly long-winded, and so abbreviated titles or referential names were frequently used in their place. This particular copy of Gentillet’s work, for example, bears three different names on the item itself: “Discours sur les moyens [etc.]…” on the printed title page, “Discours de Macchiav[elli]” on the spine, and “Contremach” or “Contre Mach” on the top edge of the text block (the abbreviation is taken from a portion of the work’s subtitle: “Contre Nicolas Machiauel Florentin”).

This confusion about how to “properly” refer to the work can be seen in the various names of reprints and later editions as well. Here at MSU we have several versions of this work cataloged under different titles:

Discovrs svr les moyens [etc.]… — With the name copied directly from the title page of this 1579 printing (inc. the archaic use of “V”s for “U”s)
Discours contre Machiavel — The title of this 1974 updated edition
And finally, Anti-Machiavel — A 1968 printing that uses a historically common shorthand title for the work, one very similar to our CONTREMACH edgemark

Secondly, the placement of our CONTREMACH title indicates that this book may not have always been shelved in the way most modern readers and library-goers are familiar with—upright with its spine facing outward. The use of edge-marks such as this, as well as historical depictions of book collections in art, show that books were often stacked on top of one another with the edges of their text blocks visible.

And just because it’s relevant, I’m going to piggyback off this post to share a recent acquisition for MSU Special Collections: A 17th century edition of Machiavelli, backdated to circumvent Church censorship. From the bookseller’s description:

“As Machiavelli’s works were placed on the Pope’s Index librorum prohibitorum in 1559, later issuing of his works use a false date as an imprint (as in 1550, the original date of publication) to avoid censorship.”