This past Monday CAP had the opportunity to tour the Munsell facility. A few months ago we realized that Munsell headquarters were a mere hour drive from campus. Katy reached out to their organization, and shortly after our tour was on the books! To say that the CAP fellows and Dr. Goldstein were excited is an understatement. Munsell holds a special place in an archaeologists’ heart. Every field school student learns how to use the Munsell soil color book, and undoubtedly Munsell is present in most archaeology labs, departments and firms around the country. 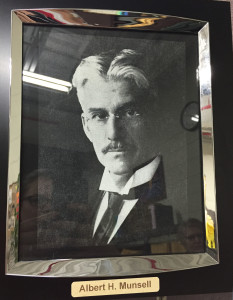 Munsell color systems, now a division of Xrite, are used by a wide array of industries. Although archaeologists tend to stick to the soil color and bead book, Munsell produces a variety of products and color standards. Our tour was headed by Art Schmehling, the Munsell business manager. We began with a short history of the Munsell color system.

Professor Albert H. Munsell developed his color system to bring order and standardization of colors to the artistic and scientific communities. As the story goes, Professor Munsell was describing an apple to an artist friend in Australia. The friend asked what specific color of red Munsell meant regarding the apple. As anyone that has tried to describe a paint color, or had debates regarding what shade of blue a shirt may be, it’s obvious that without a standard reference people describe colors very differently.

Munsell was determined to standardize the study and description of color by dividing colors into its’ three-dimensional attributes of hue, value and chroma. Munsell’s ground-breaking addition was the incorporation of the chroma scale. Chroma can be thought of as color purity. The addition of this to hue and value allowed colors to be systematically illustrated in three-dimensional space. Munsell published his first color order system book (A Color Notation) in 1905, and first published the Munsell Atlas of Color in 1915. This 1915 publication is the predecessor to today’s Munsell Books of Color. 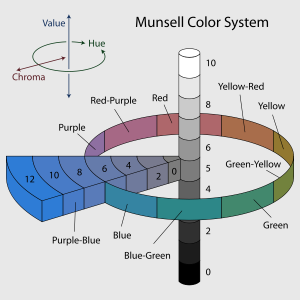 We were able to see the latest version of the Munsell soil book, and the oohs and ahhhs were universal. The Munsell soil books are built to last, so many archaeologists work with older versions (Dr. Goldstein informed Art that she still has the one she purchased in 1969). When a new version of the soil book is produced, a staff member brings it home and runs it through their dishwasher to test the durability of the pages! The new book cover was originally designed to be brown, but after some testing it was discovered that it was too easily lost in the dirt/forest. As any archaeologists can attest it’s easy to lose something brown (like your trowel!) in a back dirt pile. 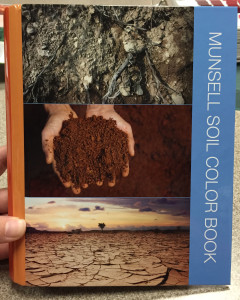 Before beginning the walking tour, we were also able to see several of the other products Munsell produces, including the large matte and gloss color books, Color Vision Tests, and X-Rite ColorChecker®. The X-Rite ColorChecker® is used by photographers to create a reference to ensure predictable colors standards under every lighting condition. It’s thought to be the most photographed object in the world! They make the ColorChecker® in every size imaginable, from 20 millimeters in diameter (for botanists), to hundreds of yards (for satellite images)! The Color Vision Tests are used by multiple industries to test for color blindness and vision anomalies. 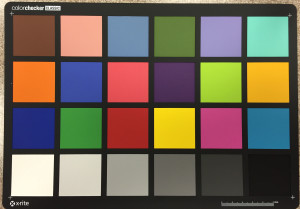 Munsell also works with industries and corporations to create color standards for their products (like creating the specific shade of yellow for Kodak film boxes, or the blue used on Black & Decker tools). They’ve created color-matching pages for everything from cheese to french fries. Munsell has even been in space! They worked closely with Nasa to create a color check system that astronauts use to detect rocket fuel on their spacesuits after space walks. 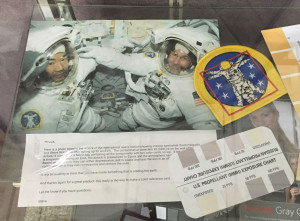 We were able to view the color mixing room, and see some purple being printed. The process of creating the colors is an exact science, and many standards are taken to ensure continuity of each product. Each of the color systems, and the history of their changes, are kept in the records area. We of course took pictures with the 10 Y/R row. CAP had an excellent time at Munsell, and we extend our gratitude to the individuals at Xrite for taking the time to meet with us. We learned many fascinating things, and look forward to continue working with Munsell in the future.